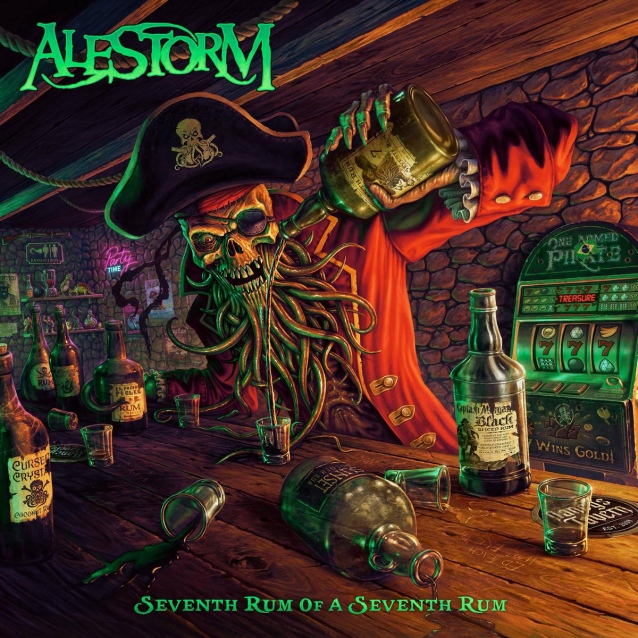 Remorselessly silly as they are, ALESTORM have been one of the biggest draws in European metal for the majority of their 18-year existence. Singing exclusively about the drunken, violent world of pirates has turned out to be the crowd-pleasing gift that keeps on giving, with the Scottish band's dogged devotion to live performance always there to back up the silliness. Admittedly, the jury's still out on exactly how funny we should be finding frontman Christopher Bowes at this point, after the whole GLORYHAMMER misogyny / racism debacle, but his effusive apology at least seemed sincere, and "Seventh Rum of a Seventh Rum" is boisterous and celebratory in the best possible way, providing a pointed reminder that ALESTORM have always been spreaders of excellent, party-starting vibes.

The formula remains the same as ever, of course, but ALESTORM have always been more musically inventive and technically adept than their goofy collective persona suggests. The band's seventh album certainly uses folk metal and other melodically inclined strains as a starting point, and snappy singalongs like "P.A.R.T.Y." and fiery opener "Magellan's Expedition" deliver the same kind of irresistibly jaunty mosh pit fodder that fans have come to expect over the years.

But there is more to this band's music than frantic jigs and boozy gang vocals. Epic and bombastic, "Under Blackened Banners" is genuinely stirring and perhaps a little less tongue-in-cheek than the stormy norm. Darker hues and a more rugged, thrash-tinged backdrop suit ALESTORM perfectly well, and they pull off similar tricks on the potentially unpronounceable but infernally catchy "Magyarország", and the strident, galloping "Return to Tortuga". Meanwhile, closing sea-shanty "Wooden Leg (Part III)" is as sweetly melancholy as it is preposterous.

As with 2020's "Curse of the Crystal Coconut", "Seventh Rum…" sounds magnificent, with thick, heavy guitar tones and a punchy crispness that, again, belies its creators' reputation as gurning lightweights. But ultimately, ALESTORM are a band that put smiles on faces while urging scowling metalheads to throw their beers in the air and dance like madmen. This time around, "Cannonball" takes the crown for sheer festival-friendly idiocy. Flagged in advance as a song that makes earlier, exalted obscenity-fest "Fucked With An Anchor" "sound tame", it marries Bowes's most gleefully obnoxious lyrics to date to a tune so catchy it may require a pre-emptory vaccine. Likewise, the title track is a manic blur of symphonic pomp and controlled aggression that somehow wrings fresh amusement out of ALESTORM's fixation with inebriated pirates, while "Come to Brazil" is a snotty, punk-metal two-minuter with absurd circle pit potential.

Resistance is useless. ALESTORM may be ridiculous, but they are so good at this stuff that struggling to maintain a straight face in the face of music this exuberant seems a pointless exercise. Very much a raucous precursor to their joyous live shows, "Seventh Rum of a Seventh Rum" delivers plenty of the glories expected, with stupidity and sophistication playing equal roles throughout. Drink up, the party's starting again.