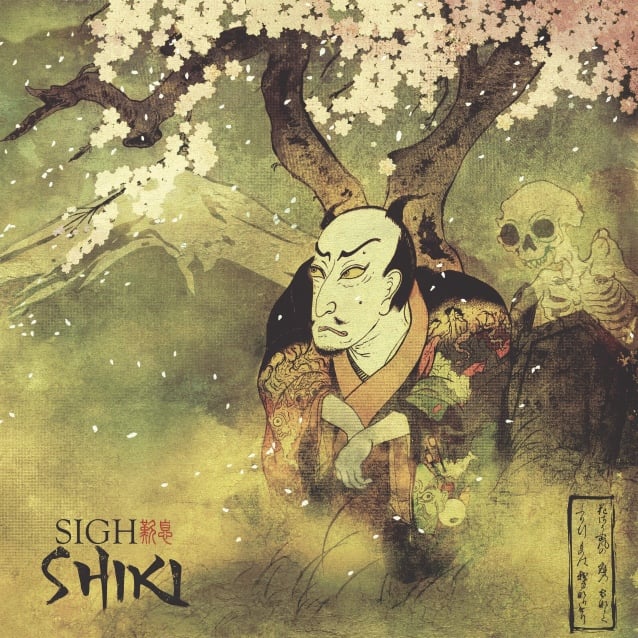 A confounding, psychedelic one-off in a world that often seems full of dreary, grey sheep, SIGH are one of those bands that can always be relied upon to release music that sounds absolutely nothing like anything else you might have heard lately. It was always the way, at least since the Japanese band's 1997 EP "Ghastly Funeral Theatre", when their tentative extreme metal adventures transformed into a truly limitless forum for creative mischief.

SIGH have always taken the path least trodden, with barbarous black and thrash metal as a spiritual core over which to drape all manner of perverse and bewitching shades and textures. Put more simply, they are out of their brilliant minds and, from the influential lunacy of "Hail Horror Hail" (also released in '97) to the Technicolor free-for-all of 2018's "Heir To Despair", fiendishly tricky to define or describe. A great problem to have, of course, but SIGH plainly deserve to be heard by a much bigger audience, particularly since "Shiki" is one of the most accessible records of their career. It's still madder than a sack full of rabid weasels, obviously. But this time founder and frontman Mirai Kawashima has conspired to make his band sound bigger and more weirdly compelling than ever.

This is SIGH in ear / eye-shredding high-resolution. Mirai and longtime foil Dr Mikannibal are accompanied here by KREATOR's Frederic Leclercq and FEAR FACTORY drummer Mike Heller — two certified powerhouses and an extra layer of muscle to push things along. But new blood aside, "Shiki" still belongs to the same, deranged world of genre fluidity and crackpot collage that has informed everything SIGH have done since the late '90s. The difference here seems to be that these songs have been more meticulously crafted, with some of the impulsive contrariness of earlier albums set aside, and production values have been nudged into the pristine present.

An album loosely based on the themes of "the four seasons" and "time to die" (as good as any, let's face it),  "Shiki" exudes a confidence that has often been concealed behind multiple layers of weirdness on earlier albums. Opener "Kuroi Kage" is an imperious starting point; from its bombastic, almost rock-opera-like overture to the churning, TRIPTYKON-like doom of its main riff, it re-imagines SIGH's multifarious sound as something bigger, grander and more in keeping with its creators' stature. In contrast, "Shoujahitsumutu" is as violent and vitriolic as anything SIGH have recorded in 30 years, with flesh-flaying blastbeats, spiraling solos and a sense of urgent momentum that sizzles right until the end. Recent single "Mayonaka No Kaii" is another gem: a slithering, psych ballad that blossoms and distends, drenched in alien synths and sparkling electronics, but still rooted in a grotesque swirl of dark, metallic strains. On an album full of wild ideas brought to life, bewildering centerpiece "Satsui / Geshi No Ato" has to put the work in to stand out. Across seven masterful minutes, it mutates from symphonic metal with a Middle Eastern flavor, to glitched-out and simmering trip-hop.

Unhinged mashups are far from an original concept at this point, of course, but SIGH are so secure in their methods and madness that even the most bizarre elements have been assimilated with the greatest of ease, and this wonderful deluge of insanity sounds like the most natural thing in the world. Masters at work, basically.