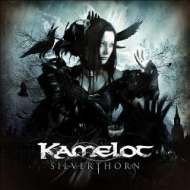 A few years back, I was stranded outside a venue as guest of a band opening for symphonic metallers KAMELOT. My hosts had been detained at customs on the same day as the gig, hence their late arrival. Fortunately for me, I'd interviewed former KAMELOT vocalist Roy Khan a week prior and the band spied my dilemma, throwing me onto their guest list at the last minute. For that, I'll always make room for them in my queue. Incidentally, KAMELOT is one of the finest of their ilk, considering symphonic metal as a form is on borrowed time.

For now, KAMELOT continues to storm through their glory ride on the surge of a still-hefty fan base no doubt breathing easy that the unexpected departure of Roy Khan didn't lay this unit on the wayside. Instead, the equally animated Tommy Karevik (SEVENTH WONDER) steps into Khan's place, wielding his own arsenal of gusty altos and elevating passaggios to keep KAMELOT humming on their tenth studio album, "Silverthorn".

If there's any distinction between "Silverthorn" and KAMELOT's notable predecessors "Eternity", "Epica", "Karma", "Ghost Opera" and the spectacular "Black Halo", it's perhaps the feeling of steadfastness and efficiency on this one. By the time "Silverthorn" hits a melancholic ballad five songs through on "Song For Jolee", the album has already banged through the thrash gallops of "Sacrimony (Angel of Afterlife)" and the pounding power modes of "Ashes to Ashes" and "Torn". None of these songs drift far beyond the four minute mark and you've already felt like you're in the midst of an expedition by the time "Song For Jolee" forces a momentary quietus to the action.

Outside of the gorgeous nine minute madrigal-cantata "Prodigal Son" in which Tommy Karevik declares his locus with authority in both a solo capacity and amidst a baritone (and later on, soprano) choral section, KAMELOT employs an attentive leanness to this album, at least from a duration standpoint. One of the lushest and best-played fugue epics in KAMELOT's entire career, "Prodigal Son" is the major league payoff for everything else that rings somewhat by-the-numbers but is flung with undeniable passion. In fact, one can feel KAMELOT beginning to stray from full-on progression towards elemental, Gothic power metal more focused on drive than overture. Albeit, there is a brief YES and ELP prog arrangement prior to the rear stanza of "Falling Like the Fahrenheit" you just know was done strictly for a kick.

Other shake-ups to KAMELOT's scheme include some out-of-nowhere Stygian black metal growls on "Sacrimony (Angel of Afterlife)" and some furious grind-step tempos on the title track. As ever, Thomas Youngblood and Oliver Palotai engineer emotive bars and sequential layers designed to jerk the richest textures out of Tommy Karevik, who responds as if he's been a part of this band for at least five years. Pit alongside female soloists and choral washes on the stout thumper "Veritas", Karevik lets his aura fly free, staying well inside but occasionally chucking outside of the script. The accordion-decorated outro on this one is left-of-center, but for certain, KAMELOT had quite a blast during these recording sessions and Karevik is likely the conduit.

While we wish the ailing Roy Khan all the best in his recovery, KAMELOT fans can take comfort Karevik has their interests in his mind and in his projection. Flexing himself to the mid-tempo bangs and the lavish sonatas he's called upon to deliver, naturally he's going to emulate Khan more often than not. However, Karevik sounds like he has more than a handful of his own dabs which will be revealed once his bandmates are fully acclimated to him. Thus, "Silverthorn" is one heck of an introduction piece to a new era in KAMELOT, and as long as symphonic metal still draws listeners, this band will remain on an equilibrium (if not supersede them outright) with NIGHTWISH, EPICA, DELAIN and SONATA ARCTICA.