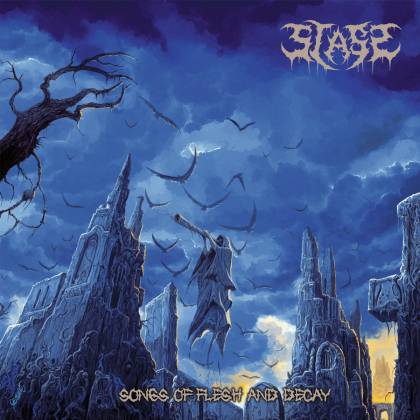 Songs Of Flesh And Decay

It's January, so that must mean at least one new album from Rogga Johansson. And here it is, the long-awaited follow-up to STASS's 2017 debut "The Darkside". Unlike most of the Swedish workhorse's higher-profile projects, STASS are a bona fide band, and while "Songs Of Flesh And Decay" was almost certainly not recorded in a single, sweaty room, it certainly sounds like the work of a living, breathing and blasting death metal band, rather than another wholly laptopped liaison. They are also one of Rogga's more pointedly melodic projects, with a knack for memorable choruses and old-school Stockholm hooks, which only occasionally surface in his more brutal efforts. The presence of CREMATORY vocalist Felix Stass explains both the band's name, and the exhilarating, flab-free and darkly catchy nature of these tunes. Clearly this is a collaboration made in death metal heaven/hell.

Opener "Dreams Of Rotting Flesh" is absurdly catchy, perhaps in spite of its gruesome title, and makes no bones about its debt to the early-to-mid '90s Gothenburg sound. But where STASS part ways with their tuneful forbears is in the truly psychotic levels of aggression in each and every song's ensemble delivery. This is breathless, bug-eyed stuff from start to finish, so even when indulging in spooky dynamics for the brooding "Beneath A Darkened Moon" or conjuring echoes of ENTOMBED's "Left Hand Path" for a couple of riffs during "Sounds Of Terror", these songs' accessibility is always balanced out by the omnipresent threat of a good, hard kicking.

Steeped in mystical, old-school horror, rather than more contemporary unpleasantness, there are strong undercurrents of gothic macabre swirling around underneath most of these songs. The titles say it all: "Fear Of The Living Dead", "The Skeletons Are Ready", "Hatchet Lover", etc., STASS are tapping into some fundamental heavy metal preoccupations here, adorning these simple but lethally effective death metal anthems with several layers of shadowy intrigue and B-movie shlock. Combined with Rogga Johansson's perennially mind-blowing ability to pen immaculate riff after scything riff, the band's deadpan goofiness ensures that "Songs Of Flesh And Decay" is a bloodthirsty riot from start to finish.

Of course, this is only the start. There will be more music from the ever-prolific guitarist for later in 2021. In the meantime, nobody serves up Swedish death metal quite like the man himself. With Felix Stass's grandmaster growling adding even more authority and grit, this is as essential as anything else in Rogga's vast and ever-expanding canon.