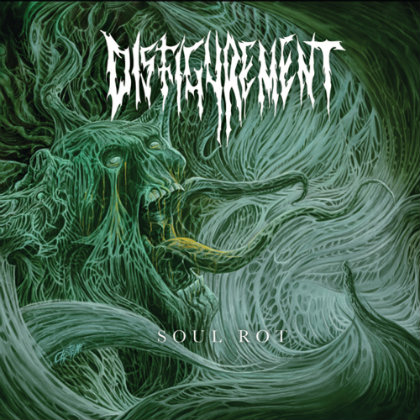 Once again, the red-hot state of Georgia coughs up a winner. Instead of sludge-prog, crunk, tech-grind or doom, Atlanta's DISFIGUREMENT serves up an exemplary blend of Scandinavian and American-styled death metal. Fine-tuning their act in a hurry since starting in 2011, this band will call to mind HYPOCRISY, DEICIDE and DISMEMBER, yet there's something fresh to this band or at least so polished they stand out.

Following their "Abyss of Hatred" 7-inch, DISFIGUREMENT releases "Soul Rot", a rampant five-song EP yielding seriously high aptitude for a band this early along their course. Better, DISFIGUREMENT retains a gory, raw edge that keeps them honest. From the complex chews in the opening rails of "Noxious Sensation", DISFIGUREMENT shows they have their act together. Every mode the band plays in is done with competence and motivation. While keeping to a primarily monstrous pace on the EP, the random tempo shake-ups allow the band to parade their chops and plot their dense tones with shrewdness.

"Soul Rot" has a sweaty yet disciplined feel hefted by guitar point breakers and furious shredding from Adam Besserer and Richard Olsen. Their tag solo sections on "Foul Light" and "Solitude" are terrific. Twice in each song, Besserer and Olsen exhilarate in tandem before separating into dual melodies then rejoining the band's blustering thrusts. Underscored by Max Madara's viscous bass blobs, DISFIGUREMENT stays chewy and violent even when filling any voids with grandiosity.

The title track and "Entrance to Emptiness" gain the most benefit of DISFIGUREMENT's willingness to trade speed with movements of controlled hostility. Each song contains stellar chuffing intros that are quickly engulfed by rancorous lunges. Nate Godbee woofs along to the band's hastening spasms and fluid decelerations while drummer Vaedis rockets, if coming off choppy on rare occasions. To the good, Vaedis rolls his floor toms like ripples emitted from Hades in the middle of "Entrance to Emptiness", and overall proves he's a well-oiled cog inside a lambasting engine of aggression that's sure to make a major impression upon the death metal market.

This writer is convinced; there's something in the water down in Georgia. "Soul Rot" is a freakin' burner and this band can't be held to the deepest fathoms of the underground for much longer. The true test of DISFIGUREMENT's acumen will come when they're ready to cut a full-length, and one can only expect that effort to be outstanding.