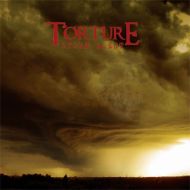 Originally released in 1989 (and never in the United States),thrash fans on this side of the Atlantic now have a golden opportunity to revel in the vintage Texas metal of TORTURE's "Storm Alert". After releasing 1987's "Torture Kingdom" EP and "Storm Alert", the El Paso band called it quits. Now re-mixed by Neil Kernon at the famed Sonic Ranch and re-mastered by Alan Douches, "Storm Alert" benefits from a cutting thrash guitar tone and crisp rhythm section sound to go with some better than average songwriting.

Playing a style characteristic to varying degrees of bands like DARK ANGEL, DEATH ANGEL, and early SLAYER, as well as a riffing style and tone that at times brings old ANNIHILATOR to mind, the band generally succeeds in making the arrangements interesting without forgetting about catchy melodies and grooves. "Ignominious Slaughter" is the supreme thrash monster of the bunch, the up-tempo old school crush and the charmingly awkward call-and-response chorus approaching perfection. It is but one example of the extra boost given to the album by Tortured Tom Hicks' jagged-edged and snarling, semi-speak vocals (excluding instrumentals "Whips Pt. 1" and "Whips Pt. 2", and the classical/operatic "Intro").

The riff-raining arrangements and relatively long track lengths (most between five and eight minutes) give one plenty of opportunity to bask in the glow of music written during the golden '80s. The night of Santa-turned-Satan terror told in "Slay Ride" (complete with Christmas carol intro) and rollicking attack define what made the era so much fun. Taking the cake is the 11-minute thrash epic "Dwell into Surreality". Amazingly, the song never drags and its array of riffs and changeups (including acoustic guitars and keys) is skillfully assembled.

"Storm Alert" is easy to recommend to old school thrash-heads. Good riffs, memorable lines, and tons of fun make this one a worthy addition to the CD collections of the denim-jacket-and-band-patches crowd.