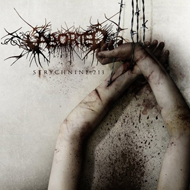 01. Carrion
02. Ophiolatry On A Hemocite Platter
03. I35
04. Pestiferous Subterfuge
05. The Chyme Congeries
06. A Murmur In Decrepit Wits
07. Enterrement Of An Idol
08. Hereditary Bane
09. Avarice Of Vilification
10. The Obfuscate

Europe's (as in members from France, Belgium, and the UK) ABORTED haven't made a bad album yet. However, I did find 2007's "Slaughtered & Apparatus: A Methodical Overture" to be a slight letdown from "The Archaic Abattoir". There is no question that the former is a good death/grind album (obviously, the score was 7/10),but it seemed that the band was in a stylistic transition, one that had them incorporating more melodic nuances, less calamity, and a cleaner sound. The songs could have been more distinct too. Of course, many a critic heaped higher praise on it than I, so chalk it up to that whole opinions-are-like-assholes thing. Needless to say, I was anxious to hear what ABORTED would do with the new full-length.

What they've done is made a better album that more effectively joins the melodic parts with the band's trademark rip-roaring riffs and raging-bull delivery. I'd even venture to say that "Strychnine.213" is a heavier album than "Slaughtered & Apparatus: A Methodological Overture" and the tracks are indeed more distinct. The result is a disc that you'll be more inclined to remember and have no qualms about listening to multiple times in a row.

So what's the big difference? That's the thing; it's less about "big" differences, than a whole lot of little qualities. First of all, there are numerous cool ‘n crushing riffs that jump right out of the mix. Sebastien Tuvi and Peter Goemaere really tear it up on the disc. Pay special attention to "The Chyme Congeries", "A Murmur in Decrepit Wits", and "Avarice of Vilification". You also get the staccato insanity of drummer Daniel Wilding; the beats on this one are just plain bad ass. Overall, the compositions are assembled in a way that maximizes the impact of every pace change and compositional twist, whether it be a particular riff that bridges two sections, a striking guitar solo that soars out of the calamity, or the occasional hook (e.g. "Ophiolatry On a Hemocite Platter"). Vocally, nothing has really changed, as Sven De Caluwe keeps it consistently (and distinctly) brutal, just like he always does (i.e. you'll need a lyric sheet). Don't look for Colin Marks' gruesome cover art to show up on Wal-Mart shelves either.

Aside from an Eric Rachel (THE RED CHORD, THE BLACK DAHLIA MURDER, GOD FORBID) production that could stand to breathe more, "Strychnine.213" is another lesson in violence from ABORTED. Rather than compromise to win over a broader group of fans, the band has simply upped the dynamics without dulling the sharp edges.