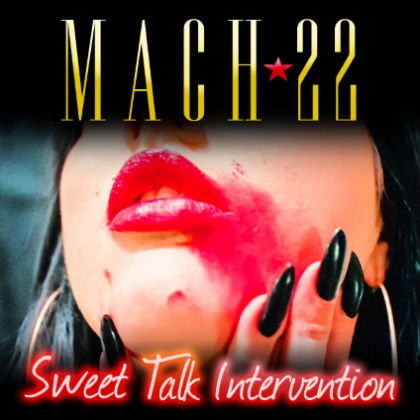 There's something a mite distressing coming to a band of young bucks in 2014 strutting the Eighties American hard rock look that's on the borderline of glam. The image is barely in-style these days, if bordering on tacky-retro, thus the temptation to bite thumbs is great, if fogyish.

MACH-22 looks L.A. and they sound L.A., so much they won Guitar Center's "Onstage With Slash" contest over three thousand entrants. The thirty gees MACH-22 scored in that battle of the bands was obviously sunk into the production of their debut album, "Sweet Talk Intervention", because it sounds as pro as could be expected for a new group. Better, MACH-22 includes the progeny of CINDERELLA's Jeff LaBar, Sebastian, which offers extra buzz for their press junket.

It's no fluke these guys were handpicked by Slash himself. "Sweet Talk Intervention" is super-tight and stocked with the ingredients for success: popping rhythms, humming bass drives, sticky guitar riffs and an energetic vocalist who exhibits a solid combination of street sense and a soulful command over his delivery.

While the album is half-filled with pumping rock blasts like "Constant Denier", "Go Ahead", "I'm Just a Man", "Backslider" and "Nevermind", the rest of "Sweet Talk Intervention" takes an easy ride with mid-tempo kicks like "Radio" and the southern rock swing of "Stone Rose". AC/DC figures plenty into "Go Ahead" and "Don't You Give Me", while there's a slight air of KING'S X about "Stone Rose", "Nevermind" and "Made to Love". Otherwise, MACH-22 is reminiscent of BLACK 'N BLUE, SMASHED GLADYS and other blues metal crews that haunted the City of Angels back in the day.

Sebastian LaBar, along with second guitarist Ted Merrill, have plenty of hooks to rev up "Sweet Talk Intervention" with, while Jaron Gulino's bass plugs give MACH-22 much of their thrust. Drummer Damian MonteCarlo has a great touch and a knack for headstrong beats, while Lamont Caldwell leads this band with spangled confidence.

As a band, these guys possess rock 'n roll smarts treading toward the sleazy sound of Sunset without getting ankle-deep dirty. Instead, MACH-22 has a classy method that sits well, no matter if you were there back in the day or if you're chasing the ghosts of the Troubadour.