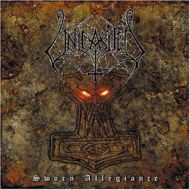 After five years of stomping around in the wilderness from 1997-2002, UNLEASHED are back hacking out albums and on a roll again. While this is undeniably a good thing for death metal in general, it wouldn't necessarily be the second coming of (the anti) Christ as musical comebacks go.

This is based on the train of thought that UNLEASHED weren't entirely the pick of the growling hordes first time around. Yes, a riotous, rough-hewn, no-frills mix of SLAYER and VENOM and the like — topped off by a frontman always willing to whip out a hollowed horn full of mead to toast the power of metal — but not essential listening by any means.

Time away has obviously served them well, however, because "Sworn Allegiance" is without doubt the best thing they have laid to plastic thus far. A rampaging opener always gets the juices flowing nicely, and "Winterland" is most certainly that — galloping along in the spirit of NIHILIST (frontman Johnny Hedlund's classic pre-UNLEASHED outfit who turned into ENTOMBED upon his departure),then breaking into a face-melting middle riff and solo. "Follow that!" you find yourself shrieking, and on this occasion they do with "Destruction (of the Race of Men)", another traditional chugger that cuts through like a freshly sharpened rapier. Where once the Swedes seemed slightly bereft of magic beyond the basics, this time the catchiness is there and the lead guitar work from Fredrik is at times scintillating, taking the art of old school fret-mauling into — dare we say it — places of melodic pleasantry. Talking of NIHILIST, there a few more references to the visionary outfit before "Sworn Allegiance" is finished. Take "I Bring You Death", which fulfils the promise of its title on a controlled blastbeat and fat, obnoxious chords.

Fourteen tracks, though, is a big ask in terms of maintaining consistency and, as we all know, all good shredding sprees must come to an end. On "Helljoy", Johnny delivers the kind of hammy performance that VENOM's Cronos would when his tongue was planted firmly in his cheek — and so the riffs fall suitably into line behind it. Further in, "One Night In Nazareth" simply isn't up to scratch against the album's explosive start. But what really doesn't do them any justice is "Metalheads" — three-minutes-thirteen of solid cheese with a cheese fondue piped onto the top. The fact that this metal-hailing anthem features the line "Hell yeah, that's how it goes — rock hard and heavy at every show" should tell you that you it was made for the "skip track" button.

Nevertheless, UNLEASHED are largely back better, brasher and more potent than ever. Raise your horns to their Viking power.