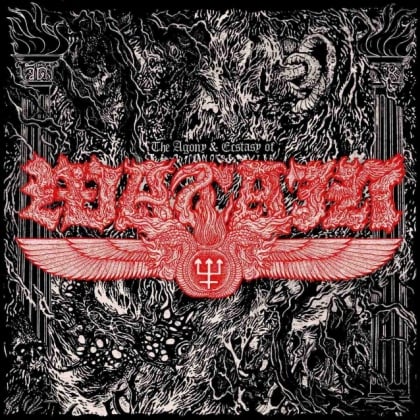 The Agony & Ecstasy of Watain

Any kind of extreme music act that sticks around for several years faces the challenge of knowing how to proceed once it is three or four albums deep into its career. Pushing the intensity, whether it's speed or heaviness or whatever, will reach a ceiling at some point, but Scandinavian black metal maniacs WATAIN have successfully challenged expectations for years. They've proven that they're an extreme band that remains relevant years after their inception, much like bands as varied as IMMOLATION, GOATWHORE and NAPALM DEATH. With "The Agony & Ecstasy of Watain", the Swedish band's seventh full-length, WATAIN has created one of the best albums of its career just one year shy of being a quarter century old.

"The Agony & Ecstasy of Watain" is incredibly dynamic and textured, and there is ample variance regarding tempo and pace. The release includes the expected bulldozing songs like "The Howling", a track that's just as epic as it is blasting. But WATAIN open the album with the absolutely belligerent and raging track "Ecstasies in Night Infinity", arguably the most frenetic song they've ever written. Obviously lending to a more accessible, digestible musical experience is the contrast provided by the more melodic and tempered pacing of "Serimosa". Just like everything else on the album, the song oozes with a genuine sense of evil, and the slower nature augments the overall tension that's present throughout the 10-song album.

"Serimosa" is indeed one of the album's more memorable tracks. The reason that WATAIN has been the cream of the crop, a band that stands apart from countless bands of this ilk, is because WATAIN is mindful of the importance of catchiness — well evident on "Serimosa". The ever so eloquently titled "Black Cunt" is yet another example of this, a song that rides forth upon a tasty mid-paced groove. While WATAIN is a proven second-wave black metal band that has properly distilled and synthesized its influences within its easily recognizable sound and identity, the ghost of CELTIC FROST overtly surfaces on a riff midway through the song.

"We Remain" is exceptionally left field for WATAIN. Farida Lemouchi (ex-THE DEVIL'S BLOOD) lends her powerful melodic vocals to the song. The collective performance is astounding and appropriately nestled within the flow of the album.

Following this stylistic departure, WATAIN rounds the album out in more familiar territory with the very heavy traditionally black metal sounding song "Septentrion". It's an adventurous WATAIN album, and the Swedes still walk their own path, surely challenging the expectations of many tried-and-true fans with songs like "We Remain". The release is unquestionably a journey, an experience. WATAIN continues to be evil and mysterious, but they're staining the canvas with newer, untried colors. "The Agony & Ecstasy of Watain" won't be revered as much as "Casus Luciferi" or "Lawless Darkness", but it is definitely the best album that they've released in over 10 years.