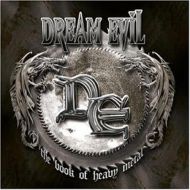 The Book Of Heavy Metal

Judging by the vibe surrounding this third DREAM EVIL album, big things are expected. And from the fact that these Swedes scream "Metal!" at every given opportunity and willfully admit to rifling the riff chests of every heads-down-no-nonsense act known to man — JUDAS PRIEST, ACCEPT and DIO are apparently their three main victims — you know exactly which countries in Northern Europe are finally going to take them to their hearts in a big way.

In truth, "The Book Of Heavy Metal" goes far beyond plagiarism into caricature and parody. As early as the opening title-track, the lyric makes references to not requiring a massive car, house or "ugly wife" in favor of a life dedicated to heavy metal, and even manages to squeeze a famous line from Shakespeare ("To be or not to be") into context — totally thick-headed stuff welded to an even thicker riff, but you can't deny the fist-banging qualities of this particular ditty. MANOWAR have been making a killing out of this kind of brazen approach for years, but some of this might even make Joey DeMaio smirk.

The main difference between this lot and vastly overrated fellow countrymen HAMMERFALL (besides the fact that DREAM EVIL frontman Niklas Isfeldt can actually project his voice) is that DREAM EVIL appear not to foolishly play down their influence-borrowing tendencies and concentrate on pounding like their lives depended on it. That title track is the one that really stands out above all else, but there are other moments on here that work because the band are positively charged with enthusiasm. "No Way" is ridiculously OZZY OSBOURNE, from chugging riff to vocal sneer, "Let's Make Rock" sees Snowy Shaw (ex-MERCYFUL FATE/KING DIAMOND man) lift the drum intro straight from ACCEPT's "Balls To The Wall" before the guitars head off in the same spirit, and "The Crusader's Anthem" is equal part IRON MAIDEN and Dio-era SABBATH. We should again point out that absolutely nothing within DREAM EVIL's repertoire contains a shred of originality or ingenuity, but with a seismic production from Fredrik "Hammerfall/In Flames" Nordström, everything locks in nicely.

Consider a mark knocked off for them being a glorified tribute act — but possibly one of the best you'll hear all year.