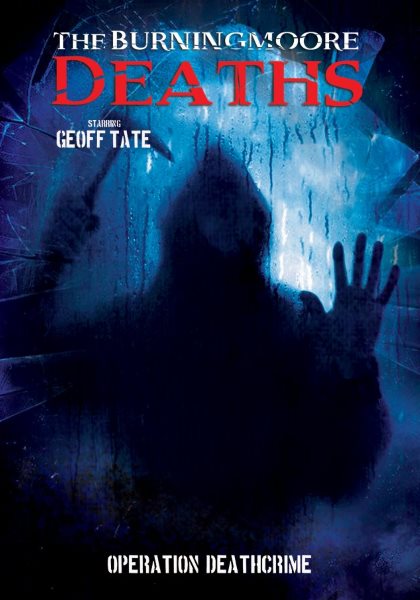 We're already coming up on five years since the QUEENSRYCHE division, and though Geoff Tate may have whiffed a bit with his hasty "Frequency Unknown" album, he's since gained a lot of steam. Thus far through the first two albums of his reported trilogy with his new band, OPERATION MINDCRIME, Tate has shown versatility in his musical rebirth. As a well-versed stage performer, it's only logical to assume Geoff Tate could readily handle a transition to Broadway, much less a feature film.

Well, the latter situation has occurred and though one might've assumed Tate to be cast in the lead role of an Ingsoc-esque dystopian odyssey, instead, he's pulled off a shock-mockumentary. Ladies and gents, meet Geoff Tate, serial murderer in "The Burningmoore Deaths".

If you're at this point stuffed to the gills on the "lost footage" horror trope thanks to far too many "Paranormal Activity" flicks and the overly slick reboot of "Blair Witch", which was at least genuinely frightening in the final 20 minutes, there's still much to get excited about with "The Burningmoore Deaths". The premise is decent, if mish-mashed, but it's the execution that sells this modest little monster.

Tate plays James Parrish, a Long Island-based maniac wanted as a prime suspect for the brutal slayings of his wife and three sons. Written and directed by Jonathan Williams, the story is first set up like an A&E true-crime documentary. Here, the production is so sharp and the delivery so precise you buy into what you're seeing. This includes a clever blending of Geoff Tate's career photos serving as James Parrish's background.

This establishes a fascinatingly morbid tone to the film. The transition into the guts (no pun intended) of "The Burningmoore Deaths" works despite its risky reality tv ploy crashed into the narrative. A film crew for a home rehab show, "Gettin' Hammered," takes over 132 Burningmoore Lane in Bayside, Queens to shoot their pilot episode, in which they'll make over the waterfront property into a proposed bed and breakfast. What they don't know is that James Parrish, who has been missing for quite some time, is squatting—and killing interlopers there.

While the opening video sequence of a young couple serving as Parrish's first victims at Burningmoore Lane doesn't wholly fit with the rest of the story, the film moves as stealthily at Geoff Tate does. The stationed cameras for "Gettin' Hammered" are shrewdly used, particularly the first few basement shots where we vaguely see Parrish lurking in the shadowy, waterlogged cellar. Williams lets the vast "Gettin' Hammered" crew fart around, as if we're privy to homey outtakes on top of the "show footage." This allows Geoff Tate to assume a menacing stalker presence beneath his gray hoodie. The more we see of Tate as James Parrish, with each kill caught on camera, "The Burningmoore Deaths" becomes more and more unnerving.

Williams smartly waits for the "Aftermath" sequence to lay on the bloodbath, and keeps to a traditional horror ethic of leaving us mostly with the gruesome sounds of James Parrish's squishy doings. By the time we see Geoff Tate in full rage mode as a screwed-up disciple of "Monos," a mythological personification of doom, he's goddamned freaky. That distant shot of Tate/Parrish observing the film crew from afar: it leaves a mark.

Consider it a classy move, only one Tate-penned song appears in the final credits of "The Burningmoore Deaths"; most of the music is supplied by Andrew Kadin and DAWN OF SOLACE. This film has a few flaws, but overall, it's a remarkably effective slasher film with a contemporary twist and a veteran rock singer. No longer on the ropes, Tate is making a wonderfully creepy case for a new angle as an entertainer.