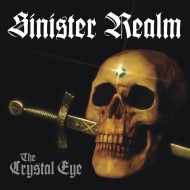 Allentown's SINISTER REALM can add another notch to their collective belt for releasing "The Crystal Eye", a mighty fine follow-up to mighty fine debut. This is custom built, rock solid traditional heavy metal that comes with generous portions of class and crunch, much as one would expect from a Shadow Kingdom Records release.

If you've heard the debut, then you will generally know what to expect from "The Crystal Eye", except that much of the sophomore effort seems to move more energetically and is somewhat less doom-tinged than its predecessor, the exceptions noted below notwithstanding. Splitting hairs, the sound recalls the likes MANILLA ROAD and IRON MAIDEN, as shaded with a little PHARAOH and HOUR OF 13, but all of it is cut from the same traditional heavy metal cloth. And that includes the pre-'80s JUDAS PRIEST and BLACK SABBATH support beams vital to structural stability.

Of most importance is that the songwriting is of a high quality and there isn't a track on here that you'd be tempted to skip. "The Crystal Eye" is eight tracks that work best as a collection; once you start you'll have no interest in stopping until the end anyway. The proceedings are opened with the up-tempo, grand heavy metal of "Winds of Vengeance", then moves on through to the mid-tempo "Tormentor (Deliver Us)", which slows to grand, attention-grabbing chorus, and into another comfortably familiar trad-metal tune called" With Swords Held High", its chorus vaguely reminiscent of MANOWAR. The title track moves like a triumphant army on the march, "Signal the Earth" hooks its prey without a struggle, and "The Shroud of Misery" down shifts and left-turns into heavy metal of the melancholic doomy variety, inclusive of a very memorable chorus, as well featuring one of the album's many exceptional guitar solos. A three-and-half minute instrumental called "Battle for the Sinister Realm" holds up just as well as the vocal-led cuts and the album closes with nine-minute epic "The Tower is Burning", complete with exotic flourishes, choral lines, and pattern and vocal inflection that reminds of the work of Ronnie James Dio in both DIO and RAINBOW.

What is there to complain about? Not a damn thing, as should be obvious from the preceding paragraph. "The Crystal Eye" is quality stuff and SINISTER REALM is a group to which you should be paying close attention. Up the irons indeed.