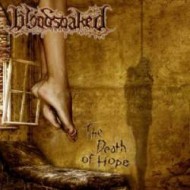 The Death of Hope

With the rise of a trio of underground stars — INSIDIOUS DECREPANCY, PUTRID PILE, and BLOODSOAKED — came something that has traditionally been handed out by death metal fans with the utmost selectivity: Respect. Shawn Whitaker, Shaun LaCanne, and Peter Hasselbrack, respectively, have earned it with several well played, finely crafted albums and some surprisingly successful tours and live performances. Whereas a "band" like PUTRID PILE goes for more of an over-the-top brand of death metal extremity (though not without an increasingly memorable songwriting approach from one album to the next),Hasselbrack's BLOODSOAKED relies on the song-based rudiments of traditional death metal, resulting in conventional song structures that are more easily digested than the average album of brutal death.

In other words, "The Death of Hope" relies on steel-belted cadences, basic choruses you'll remember, and all the subtly of an iron-fisted punch to the gut. The riff is the driving force, pushed and pulled as it is with the strategic use of blasts and fills, courtesy of Shane McFee's drum programming. McFee also mixed and mastered this crisp 'n chunky tool of mechanized warfare. The album consists of 10 battering, mostly mid-tempo (with speed bursts) death metal marches that emphasize groove in the tradition of bands like MORBID ANGEL, as you'll hear on tracks like "Consume the Flesh". While competently arranged, "The Death of Hope" always sides with the song in the battle between technicality and tunefulness. The approach is direct and a song is never forced to overstay its welcome with excessiveness, making front-to-back spins not only a breeze, but a necessity. Forced to pick a highlight, it is "No God" that stands out each and every time as one that is the definitive representation of that effective mix of elements. Something about the manner in which that string of words ("Ripped, torn, mauled, screaming, bleeding") is patterned against the riff on "Mauled" makes it notable one too.

Indeed, the combination of Hasselbrack's intelligible vocals, the immediacy of the music, the fundamental catchiness (and morbidity) of the riffs, and fiery soloing from guest player James Murphy makes "The Death of Hope" an epitome of fat-free death metal. Your hunger will be fed without the concomitant bloating that too often occurs in the genre.