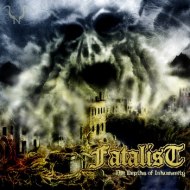 The Depths of Inhumanity

They may be from sunny California, but even a death metal novice could pick out the logo homage and the giant cross in the band photo as nods to NIHILIST and early ENTOMBED. And one chord of that murky, bleary mud-bog guitar sound will provide the final clue — FATALIST are paying tribute to the Sunlight Studios school of early 1990's Swedish death metal, with all the subtlety of a brick to the head.

And while such a sound will surely get any old-schooler salivating, a few songs in, it becomes clear that FATALIST don't measure up to their heroes in the songwriting and riffing departments. The guitar solos are nice, and frequently save a song from boredom. But too often, the riffs and vocals deteriorate into a samey blosh of either generic chugging or outright idea pilfering. There's a loose, noisy chaos at work here that sounds like some AUTOPSY influence, and that's fine, but combined with the gurgling guitar tone of the Swede masters, it occasionally comes off like a downshifting truckload of ass (and not in the gloriously depraved way the original bands pulled it off... more in a bad demo kind of way).

There are definitely solid moments — the beginning of "Life Deploration" is a masterpiece, and indeed, when it crashes headlong into the blast-beating main part of the song, it's easy to forgive these guys some youthful indiscretions. The enthusiasm is there, and it may be asking a lot of a band to emerge fully-formed on their debut album. But that's the fine line you walk when you align yourself this brazenly with a particular classic sound -- if, for example, you're going to rip off DISMEMBER as blatantly as FATALIST do on album closer "Rivers of Blood", you at least have to provide some incentive for a fan to listen to you instead of skipping you entirely and just listening to the original. FATALIST are almost there, and they're frustratingly close to awesome in places, but too much of "The Depths of Humanity" just doesn't seem like it's come far enough down the Left Hand Path just yet.