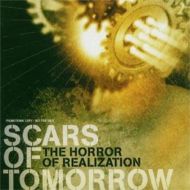 The Horror of Realization

At this point, I don't like SCARS OF TOMORROW's "The Horror of Realization" as much as its predecessor, "Rope Tied to the Trigger", but it is slowly growing on me. The new platter from the Orange County metalcore boys does boast a wider array of riffs, even more variety in the arrangement department. I just don't find the tunes to be quite as memorable.

The one constant is Mike Milford's vocal formula — the switching between growls and semi-spoken/semi-sung parts. It works fairly well for the band and never approaches the growl-and-croon style of the band's contemporaries. It does begin to get redundant at times though. As for the songs themselves, it starts and ends with the guitars of Carlos Garcia and David Rodriguez. Combined with a strong Matt Bayles (MASTODON, ISIS, PEARL JAM) production, the aggressive tones and jagged edges give the album a good kick. "The Constant Horror of Reality" and "The Hidden Grudge" (featuring ATREYU's Alex Varkatzas) are tough ones with plenty of chunk and stutter, the former boasting a particularly cool angular riff. This is the kind of thing I'd like to hear more of from SCARS OF TOMORROW.

The songs that are more melody-driven, such as "The Marks of Time" and "The False Love in Lust", are the ones that stopped just short of hooking me — something like being melodic without being catchy, if that makes any sense. "Murderers and Madmen" and "This Autumns Bleeding" are the types of songs that had me appreciating the aggression, but left me wanting. "The Struggle" initially had me puzzled until I began to hear that the band was onto something with the almost-dissonant melodic lead that is the song's centerpiece, one that ultimately works in a strangely charming kind of way. Finally, SCARS OF TOMORROW experiments with a series of somewhat ambient, instrumental (save for one lyric line on two tracks) pieces ("SSNOVA", "4SMITH", and "ONTHE15") that are ok, though I can't say I cared one way or the other.

In the final analysis, there are some positive things going on with "The Horror of Realization". It's not a bad album by any stretch, yet because it seems that I'm struggling to get into the groove with it, my instincts tell me 6.5, even though I'd like to go 7.