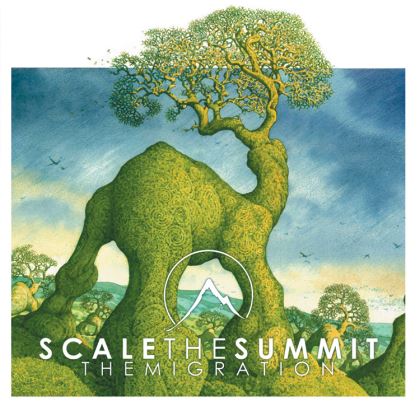 Houston's SCALE THE SUMMIT have steadily risen to the upper echelon of the prog ranks. Since their 2007 self-released debut "Monument", this band has worked as hard as anyone to enhance their craft and each step leading to their latest work, "The Migration" has taken them one step further along in the pursuit of perfection. Consider "The Migration" as close to magnum opus stature as they've yet achieved.

Historically fortifying their compositions with the revolutionary fret theories of Steve Vai, Billy Sheehan, Frank Zappa and Tony MacAlpine on top of the DREAM THEATER collective, SCALE THE SUMMIT may or may never come close to the constantly vigorous algorithms of those stalwarts. However, their communal dedication to prog, fusion, jazz and neoclassicism aligns them all in the same brotherhood. That's not to say "The Migration" is devoid of chops and scales. There are bucketloads of technical wonderment to behold from guitarists Chris Letchford and Travis Levrier, plus bassist Mark Michell on the gusty "Odyssey", "Atlas Novus" and "Narrow Salient". Those are mere warm-ups for the later songs.

Clocking within 42 minutes, SCALE THE SUMMIT scrupulously assembles a near-perfect apparatus of progressive refinement on "The Migration". They also shake out a few new tricks from their sleeves, most notably a metallic approach to a couple of the songs and a closing number that puts the grand in grand finale. Along the way comes a charismatic shoegazing guitar arc within "Atlas Novus" and one of the most full-on rocking tunes yet produced from this band, "The Olive Tree".

If you're already familiar with SCALE THE SUMMIT's albums, then "The Migration" is largely going to ring familiar, only there's even more excellence than before. One of the surprise moments of the album comes with the berserker blasts of aggression on "Oracle", which interrupts the song's rolling haze not once, but three times. This ballsy decision to interchange "Oracle" with heavied-up discharges and augmented strokes per second shows fearless bravado on top of tremendous maturity. The duality presented by "Oracle"'s mood swings makes for an energizing experience.

Likewise amped, "The Dark Horse" maintains a thicker and harder tone with Pat Skeffington's slide shuffle rhythms and dense, clouting riffs from the entire front line. Skeffington and Mark Michell are magnificent with their implanted amalgamation that seldom wanes as the track rolls and grinds, slowing only for a concluding fusion bass tweak from Michell. His lobbing trundles on the subsequent track, "Willow", ground the remote pull of the song that begins to drift toward the heavens in the middle section. Letchford and Levrier respond to Michell with crisp affirmation and escalating splendor within "Willow"'s final bars.

A couple of resonant interludes, "Sabrosa" and "Evergreen" help usher the album to its quick finish and by that time, the entire quartet have reserved their finest performances for "The Traveler", one of the busiest mid-tempo songs you'll hear this year in prog or any genre. The spectacular guitar tapestries come with little pause, save for the heaving riff chunks of "The Traveler"'s bridges. Otherwise, the notes are scattered hurriedly, as if throwing out proverbial bricks for their wayfaring muse to navigate along with the listener. This majestic dénouement to "The Migration" is one of the most mind-blowing compositions devised by SCALE THE SUMMIT and its abrupt stoppage is masterful.

More contemporary prog artists need to take cue from "The Migration". SCALE THE SUMMIT has always been adventurous in their work on top of articulate, but here they've presented a courageous blueprint on how to delve out communicative, methodical music with more efficiency than is the norm for this genre.