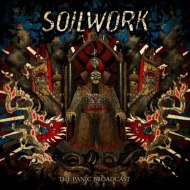 SOILWORK has been used as a reference for so many years now when critics describe the oodles of often generic metalcore and melodic death metal bands that base their songs on aggressive verses and cleanly sung choruses that one almost forgets that the Swedes are the stalwarts of the style, not the also-rans. In other words, SOILWORK albums are often the gold standard when it comes to balancing modern death/thrash metal's aggression with pop's catchiness and in fact are one of the few that continue to do it successfully. If "The Panic Broadcast" doesn't shock you back into that reality, then either you've not been paying attention or you just can't stand melody or singing in your metal.

"Sworn to a Great Divide" may not have been "Stabbing the Drama" and was one that left me lukewarm, but it still beat many of the albums from groups mimicking the style. The return of guitarist/songwriter Peter Wichers for the making of "The Panic Broadcast" surely resulted in the new album's structural cohesion and more memorable melodies, making it one that rivals "Stabbing the Drama" for lasting appeal. The new long player also sees SOILWORK returning to a more aggressive style, even more so than "Stabbing the Drama", whilst ensuring that melody remains a primary component. Many of the songs triumph for their pugnacious qualities alone; "Two Lives worth of Reckoning" and "King of the Threshold" are stone cold killers in that regard. "Deliverance is Mine" is a defining moment for the balance struck between those same attributes and a great dynamic chorus that is remarkable for its blurring of fury and infectiousness. That "Let This River Flow" stands as the album's most accessible track and Björn "Speed" Strid's most endearing cleanly sung vocals on the supremely catchy chorus, yet still fits snugly within the overall flow is a testament to SOILWORK's reclaiming of the songwriting throne.

"The Panic Broadcast" defines "return to form" and exemplifies the reason why the Swedish greats transcend notions of 21st Century melody in extreme metal. Never count out SOILWORK. It is a mistake you'll never live down.