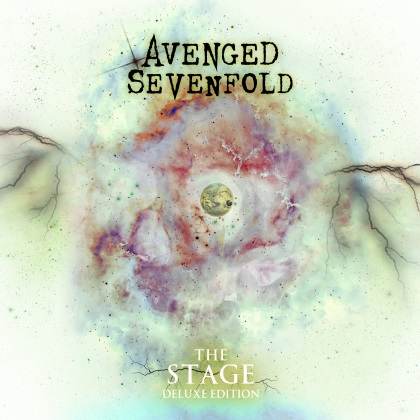 A terrific album just got even better.

In 2016, AVENGED SEVENFOLD tackled its first concept album, "The Stage", an album rolling off the tongues of many in the same sentence as "masterpiece." "The Stage"is a contemporary metal wonder, bleeding the band's toughened agro chops into savvy progressions. Call it a little bit of QUEENSRŸCHE, CRIMSON GLORY and DREAM THEATER and a little bit of STONE TEMPLE PILOTS and ALICE IN CHAINS, adding a smidge of L.A. GUNS for good measure. "The Stage" moves with the nanobot rapidity suggested on "Paradigm"", indeed a watermark recording from a band that doesn't need to work as hard as it did to impress on the sales chart. "Roman Sky", "Higher" and "Creating God" are progressively clever, while "God Damn" and the second half of "Simulation" exalt the heaviest tones of the album. Unfortunately, not everyone was impressed by "The Stage", which leaves to question, just how high does a metal band need to lift the bar these days?

If you appreciated "The Stage"'s prolonged storyline of mankind's implosive obsession to perfect artificial intelligence (i.e. the beautiful if unsettling sci-fi film "Ex Machina"),then you'll hardly be offended by another hour of material stuffed into this deluxe edition. Even with six covers and four live cuts added to this new version's bonus disc, there's a new track, "Dose", to chew on. Nearly as busy as the ambitious fifteen-minute-plus closer, "Exist", it would've fit snugly on the original album had it not been nearly 74 minutes already.

The covers themselves are stellar. AVENGED SEVENFOLD's breezy take on THE ROLLING STONE's mopey, life-through-a-windowpane gem, "As Tears Go By", is a brave reinterpretation with an upbeat sway. Sitar and bongos give this version a lilt that was never intended, but feels absolutely groovy. The group's hardcore rake over of Del Shannon's "Runaway"—upon which guitarist Zacky Vengeance sings—may terrify the baby boomer generation, but there's a faithfulness to this Fabulous Fifties classic that can't be denied while sent through the band's freewheeling meat grinder.

Anytime you dare attempt a MR. BUNGLE cover, you're going to fall under immediate scrutiny, but give M. Shadows and the band credit for glossing its take of "Retrovertigo" with trancey reverence. M. Shadows does well here shadowing Mike Patton's reticent whirligigs. What he fluidly does en español on the gorgeous Mexican folk song "Malaguena Salerosa" is nearly as spectacular as his whispery imploring on a chunky, brilliant rendition of THE BEACH BOYS's "God Only Knows".

AVENGED SEVENFOLD is nearly by the numbers with PINK FLOYD's "Wish You Were Here", and if you're detecting a common thread of melancholy, all with dashes of progression, it should lend a better appreciation for what went into "The Stage". The labor inside this album is evident, but the aspiration to make these covers AVENGED SEVENFOLD's own should be applauded. Carrying the responsibility implied with being labeled a "New Wave of American Heavy Metal" band, AVENGED SEVENFOLD has well answered that call, regardless of whether you find them heavy enough or not.