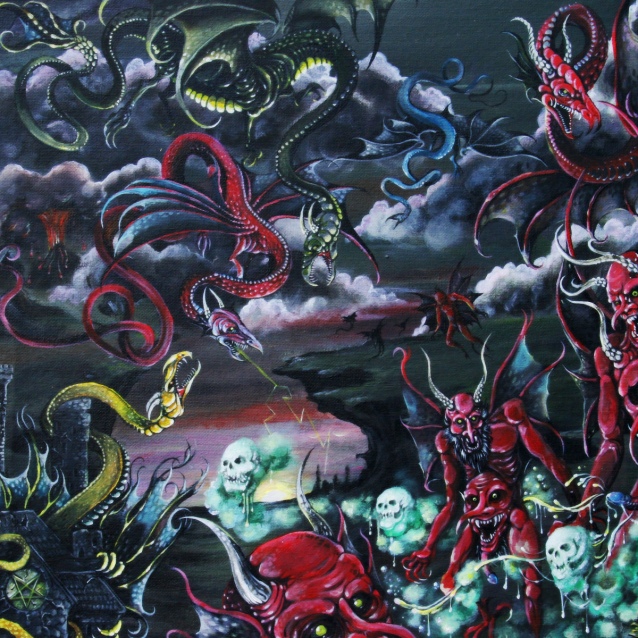 Through Sheer Will And Black Magic

01. Intro (Emanations)
02. The Architect And The Monument
03. Arena At Dis
04. Passion Under The Hammer
05. Loosen The Tongue Of The Dead
06. Fragmenting In Ritual Splendor
07. Polluting The Sanctuary
08. Itch Of The Bottle
09. Luciferian Return

Newer bands linked to various strands of heavy metal — death, thrash, doom, etc. — have been visiting the early days of their scenes. When it's done right, as with Philadelphia's DAEVA, the results can be awe-inspiring. DAEVA's debut full-length album, "Through Sheer Will And Black Magic", is a masterful display of eighties-inspired blackened thrash that sounds and feels authentic, maniacally unhinged and brilliantly managed.

The band's 2017 digital EP, "Pulsing Dark Absorptions", was originally intended as a project with no significant sense of ambition in mind. However, with the support of 20 Buck Spin and the label's invitation for the Philadelphians to perform at its biennial Migration Fest, DAEVA became a serious band. Mastermind and guitarist Steve Jansson of CRYPT SERMON drafted a couple of his bandmates, drummer Enrique Sagarnaga and bassist Frank Chin, along with frontman Edward Gonet of blackened punk thrashers INFERNAL STRONGHOLD, to flesh out the lineup. Entirely different from CRYPT SERMON's epic doom, DAEVA is an utterly barbaric black and thrash entity that's relentless, oppressive and violent.

Following a spacious, eerie, keyboard-driven intro, the remaining eight tracks of "Through Sheer Will And Black Magic" are an absolute blitzkrieg of deranged but controlled and methodical extreme metal that's deeply rooted in the eighties and early nineties, beginning with the frantic blast attack of "The Architect And The Monument". The clarity and well-enunciated lyrics spouted from Gonet's forked-tongue provide a narrative quality that augments each track's story-telling vibe. AURA NOIR is an immediate point of reference, and DAEVA is quite arguably the best newer band to tap into that classic act's energy. DAEVA stands out because the songs flow with a sense of catchiness amidst the maelstrom. "Passion Under The Hammer", for instance, begins with busy, nimble riffs that reach toward a numbing, slightly transcendental guitar reprieve prior to a fist-raising, evil groove that's tail-ended by a glorious DOKKEN-esque guitar solo. And that's just what's going on prior to a dirty, nasty, slower riff at the song's midway point.

The candid autobiographical element that's painfully evident on "Itch Of The Bottle" lends credence to the realness of DAEVA's artistic expression. The song relays Gonet's struggle with alcoholic withdrawal, referencing a period when the singer went to his job immediately after he had an ER visit: "Red bulging eyes from simulated suffocation. Gasping, clinging, and striving," he belches with a sense of pure catharsis.

Blackened thrash hasn't sounded this exciting in years. Whatever response and lasting impact that "Through Sheer Will And Black Magic" will have will become clear with the fullness of time. However that may pan out, the album's substance and high quality is simply undeniable. Hopefully DAEVA will gain traction, because this is exactly what old-school inspired extreme metal, especially in the United States, needs right now.