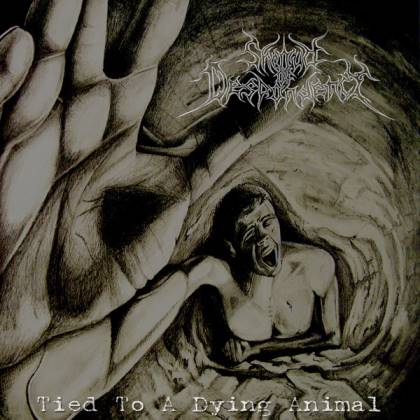 Tied to a Dying Animal

It can never be understated that double albums come with risks, the main caveats being they should either be special or at least serve a credible purpose. Otherwise, there lies automatic suspicion of bloated packaging in the interest of sales boosting. Black metal/dark meditative artists SHROUD OF DESPONDENCY have no concern in lighting up Billboard, since their music is decidedly private stuff generated by and catering to the tastes of sequestered souls. That being said, their double album "Tied to a Dying Animal" is sensory rape, even for the tastes sequestered souls.

The last truly great double metal record in recent years being SOILWORK's "The Living Infinite", SHROUD OF DESPONDENCY nearly commits an atrocity with "Tied to a Dying Animal". For a band that's been around for almost a decade and a half, they should be producing something better than the unholy rolling mess comprising the first disc of "Tied to a Dying Animal". Gratuitous song lengths in an attempt make black and death metal progressive ends up creating the previously mentioned bloated effect to the point each song is one disorderly grasping at straws after another.

Most of the songs on the first installment of "Tied to a Dying Animal", "Part 1: For Innocence, Beauty and Those Who Defile", roll past the seven minute mark, heaping scarred segments of blazing hell that often feel squeezed together instead of properly nurtured. SHROUD OF DESPONDENCY constantly tricks the listener into thinking their songs are about to end, but they tease and stagger on, no matter how fast the blast beats from Spencer Powers are engineered to try and keep the intensity rolling. Alas, it's tedium instead of intensity the longer SHROUD OF DESPONDENCY drags these tunes out. It's as if SHROUD OF DESPONDENCY had a band meeting and came up with the brash decision to take a crack at the most encompassing black metal record of all-time. Well, they've been beaten to the punch by EMPEROR, SATYRICON, GORGOROTH, ENSLAVED and BURZUM, sorry to say.

It's the scale-happy guitars of Rory Heikkila and Jon Liedtke and occasionally Tyler Okrzesik's systematic bass rolls to which the listener will be holding onto amidst the disoriented conversions through "Clenched Jaw", "Winter and Warmth" and "Long Hours". At times, the band gets things together, but mostly, they're so busy trying to prog the shit out of their overcooked tunes they outthink and outplay themselves while Ron Blemberg screeches every which way but loose. The slower parts of "The Life of Fire" exposes many glaring problems in transition and instrumental harmonizing. The guitars overrun the bass and drums frequently and it's not even an issue of anyone playing behind the beat. Even when the blast patterns take over, there's just not enough homogeneity between the players to take any of it seriously. As if the grunting sword battle and subsequent redneck ranting at the end of "Over (Coming, Taking and Breeding)" is anything to take seriously despite the compelling opening minute of the song. For all the fiery guitar work on display, "Part 1: For Innocence, Beauty and Those Who Defile" is well, not good.

Then you get to the second disc, "Part 2: For Those Who Leave and Find Better Devils", and gads, the black metal epic plague is chased away by actual songs adorned with acoustic sedation, clean, appealing vocals, chamber strings and earthy percussion. By contrast, the second disc is well-worth dialing into, if being occasionally chunky in delivery. "The Sunset Through Sulfur", "Towards the Source of Wind" and "Prominent Cross" might be considered folk metal overseas, but the subversive gloom hints at something more sinister. No matter the chiming xylophones and alt vocals of "Prominent Cross", those feel like a shroud over something malevolent. This robust artistry hardly seems possible following the preceding album, but credit where it's due.

"Untamed Energy" is likewise gorgeous with undulating guitar lines that are less full-frontal than the first album, if no less vigorous. Instead, maudlin cellos and lulling congas take the center stage with the accenting guitars adding flavor instead of barely holding things together like they do electrically on the first album. "Pollen", "Contradiction" and "Family" introduce amplification into the stripped performances, a strong combination which might've served the intent of the first album far better.

If it seems like a dupe that SHROUD OF DESPONDENCY's disc subtitling describes the other album instead of its feature material, that's probably by design. Thus "Tied to a Dying Animal" is just freaking weird, though if you've been following the band over the years, you probably saw this project coming.