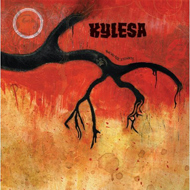 Time Will Fuse Its Worth

Admittedly, I've not paid much attention to KYLESA since the split disc with CREAM ABDUL BABAR, and for no reason in particular. Spending time with the new full-length, "Time Will Fuse its Worth" makes me want to go back and check out 2005's "To Walk a Middle Course" and the "No Ending/100 Degree Heat" EP, both of which are buried in a stack around here somewhere. Creative, but not confounding, "Time Will Fuse its Worth" is a pleasure to absorb over and over again.

The thick, semi-sludgy riffs and driving tempos that feature as much coloration (without angular overkill) as rhythmic heft, even more so now due to the use of two drummers, mesh well with a multi-vocalist approach (male and female). Aggression, whether through gruff vocal intensity or ferocious chords, forces its way through thoughtful compositions that provide ample opportunity to rock the fuck out and still make the listener pay attention to the accomplished musicianship. Part metal, part progressive hardcore, and just enough of a crusty covering make the disc rather exciting.

Though there are many noteworthy tracks ("What Becomes an End", "Hollow Severer", and "Identity Defined" are all tough bastards),the manner in which the album flows together makes it ideal for a complete album listening experience. Trippy interludes do not come off as filler, but manage to act as effective bridges between the more formal compositions. "Intermission" and "Outro" in particular demonstrate the value added with a two-drummer approach, the latter especially notable for the first minute-and-a-half of what is essentially a drum solo with a purpose.

I am not quite to the point of heaping the band with the kind of praise given to it by many a critic for past accomplishments, but I sure am impressed with the overall musicality. Balancing creativity and metallic aggressiveness is tough, but on "Time Will Fuse its Worth" KYLESA pulls it off in a way that is very refreshing. Two-word review: cool album.