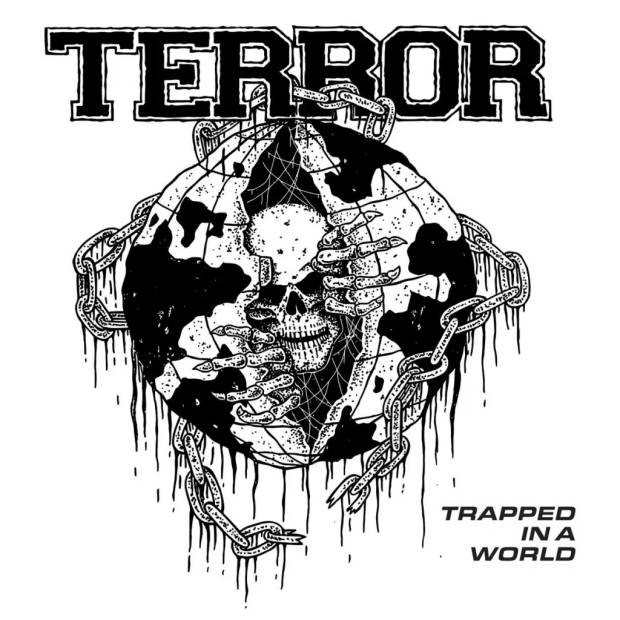 Trapped In A World

Aside from recluses, few would say they've enjoyed the forced seclusion related to the pandemic. It's been a social-life crippling nuisance at best, and an anxiety and depression fueling catalyst that's led to many suicides on the more extreme, opposite end of the spectrum. Live music fanatics have suffered, obviously, but the impact upon the hardcore community is significantly more pronounced compared to numerous other genres. That's because live music is the absolute focus of hardcore music and culture. For the better part of 20 years, TERROR has been one of hardcore's guiding lights, so a new album from the LA-based crew is reason for celebration amongst the hardcore community, especially considering how good the new effort is.

"Trapped In A World" isn't necessarily "new," though. The 12 songs on hand are rerecorded tracks from TERROR's first two studio releases — "Lowest of the Low" (2003) and "One with the Underdogs" (2004) — material that stems from the era of former guitarist Todd Jones. Jones is primarily known as the ringleader of the caustic band NAILS that he formed following his departure from TERROR, but with NAILS seemingly being on a hiatus of sorts due to lineup upheaval, Jones has reconnected with his former TERROR colleagues. "Trapped In A World" is a precursor for the band's upcoming studio album, which Jones will produce and which will include songs written drummer Nick Jett, singer Scott Vogel (BURIED ALIVE) and Jones.

Here TERROR breathes new life into their classic songs by the entire band recording the album in Nick Jett's Los Angeles studio, playing together, with the intent of capturing a raw and organic rehearsal room quality. The hardcore heavyweights have successfully achieved that objective as the tracks entail the magical coarseness and grit we'd expect from old rehearsal tapes from days of yore. Vogel's vocal contributions differ somewhat from the original versions in term of timbre, and the songs are more uptempo, as the case often is in the live setting. "Out Of My Face" and "Crushed By The Truth" are incredibly more venomous compared to the original recordings.

No one knows when "normalcy" will comfortably return. But in the meantime, for starving hardcore fans, TERROR has offered "Trapped In A World", a nice slab of steak that should keep the dog at bay, for now, anyway. The release will certainly stir anticipation for the upcoming full-length of new songs, what will surely be one of 2021's hardcore highlights. And with NAILS currently on ice, TERROR seems like the perfectly logical new focus of Todd Jones's immediate attention musically.