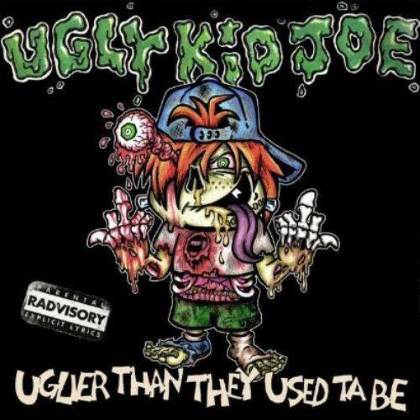 Uglier Than They Used Ta Be

It's been nineteen years since UGLY KID JOE dropped a full-length album (barring the "Stairway to Hell" EP in 2012) after hitting a momentary high up the sales charts with their runaway train hit "Everything About You". In response to their best-selling "Ugly as They Wanna Be" EP from 1991 (the "America's Least Wanted" LP hitting platinum thereafter),UGLY KID JOE returns, older and by all means wiser with "Uglier Than They Used Ta Be".

UGLY KID JOE retains the same lineup from their 1996 album "Motel California": Whitfield Crane, Klaus Eichstadt, Dave Fortman, Cordell Crockett and Shannon Larkin, who went on to GODSMACK, of course. They add yet another guitarist, Sonny Mayo (SEVENDUST, HED PE, SNOT and AMEN) and a second drummer, Zac Morris, both men having played live with the band in 2012. Thus, UGLY KID JOE 2015 unleashes their self-professed “seven-headed monster” with "Uglier Than They Used Ta Be". The good news is that this is a rock solid, mostly pleasurable poke at themselves while carrying a weighty penance for past debaucheries. Even better, MOTÖRHEAD's Phil Campbell drops by to join the party.

"Hell Ain't Hard to Find", the opening track, has an undeniable FOO FIGHTERS kick to it, but the good news is that while derivative, Whitfield Crane sounds terrific. He's dialed in to the up and down chord sequences, chiming “sold my soul to the other side, I'm a one man rollercoaster ride,” which can be interpreted figuratively or literally, given the here-and-gone course of UGLY KID JOE the first time around.

Consulting the classic AEROSMITH playbook for the scruffy but cool, the rumbling bass and guitar riffs on track two, "Let the Record Play", are stellar as Whitfield Crane outlines a whimsical look back at UGLY KID JOE's earlier years. The fortification of having a four-man guitar front pays off on the boisterous but catchy choruses here, and on the grooving "Bad Seed" thereafter. Continuing the lyrical trend of rock as the devil's music and the proverbial temptations that go along with it, "Bad Seed" throbs and Whitfield Crane sets a course of atonement while crooning and hollering with a poised set of chops.

There's a spirited life wisdom hanging behind Crane's palette now, and it's easy to sink into what he's dishing up—particularly when the riffs and beats behind him are so strong. On "Nothing Ever Changes", Crane is practically apologetic with an endearing plea amidst the song's willowy acoustic lines. He's addressing a possible lost love on top of the crash and burn effect striking many rockers finding overnight success. Later in the album, Crane pushes the latter theme on "The Enemy" like a full confessional.

"Mirror the Man" freewheels upon a breezy acoustic guitar rhythm and a shambling bass line. Here too is where having a “seven-headed monster” in camp strikes gold. The angst-laced "Mirror the Man" carries a whisper of ALICE IN CHAINS, but it's well layered with varying parts swirling all about by the song's peak. "She's Already Gone" thereafter sounds like it's been copied from contemporary AOR bands (a spot that briefly belonged to this one),but there's a tougher swagger to UGLY KID JOE's interpretation and it hits hard.

Of the remaining new originals, "My Old Man" has one of the best kicks with booming bass on the verses and whumping choruses, while the 5:47 "Under the Bottom" (the only track on the album that could use a trim despite "Enemy" coming in at 6:07) pushes the guitars to maximum, no matter the tempo. And the slower "Under the Bottom" gets, the heavier UGLY KID JOE gets accordingly.

To be fair, UGLY KID JOE tears the crap out of their cover of "Ace of Spades" and it doesn't hurt having Phil Campbell lending his guitar graces to the cause, as he does on "My Old Man" and “Under the Bottom". Whitfield Crane is no Lemmy, but he snarls great in his own right and everything about this cover is snap case. UGLY KID JOE takes on the epochal "Papa Was a Rolling Stone" by THE TEMPTATIONS, but they follow the chewy thread laid out by RARE EARTH's grimier take on it. Dropping by with a cameo is Australian vocalist Dallas Frasca and this is a fun, if nonsensical cover of the soul-funk classic.

There lies a maturity on this album surpassing its natty cover designed to lure Gen Y fans back to the fold. "Uglier Than They Used Ta Be" is going to have a tougher time reaching its audience, given most people who sang "Everything About You" in their sleep have reached adulthood. Still, UGLY KID JOE makes the most of the moment and "Uglier Than They Used Ta Be" is a modest surprise.