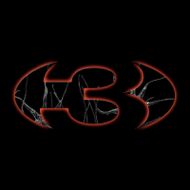 Not (thank the gods) the '80s delete-bin staple featuring ELP alumni Keith Emerson and Carl Palmer, this 3 is in fact a weird, proggy upstate New York band that pals around with COHEED AND CAMBRIA and gets compared to THE MARS VOLTA. Fans of either of these groups, PORCUPINE TREE, or the late and lamented INTO ANOTHER will absolutely adore this band, though — and will hopefully have more chance to find them, now that Metal Blade has picked up 2004's "Wake Pig" for wide release.

3 play an understated, slippery brand of infectious, pop-tinged prog, topped with Joey Eppard's uplifting (if somewhat fey) vocals. Be warned, metal purists, that 3 gets positively, unabashedly pretty on songs like "Dogs of War". Really, there's as much BEATLES-esque pop on "Wake Pig" as there is metal — this is the sort of ambitious, charming prog that revels in its own oddness, pulling in building blocks from anywhere they feel like in the service of the song. As an example: "One Way Town", at various moments, recalls TOOL, SPOCK'S BEARD, studio alt-pop wizards SELF, DREAM THEATER, and PORCUPINE TREE — all in the space of five minutes. And album closer "Amaze Disgrace" would be an album side all its own in an earlier age — a seven-minute odyssey that swells to a frantic, blissful crescendo before fading out, and making room for an unlisted remix.

There are simpler, more direct songs on "Wake Pig". "Circus Without Clowns" is new for this reissue, and it's built around Eppard's vocal line in an almost show-tune way — still affecting, but a bit less lush and gloriously overblown than some of the proggier moments. And speaking of those, it crashes right into the delightfully fucked "Where's Max" (formerly released as an instrumental, with vocals added here),a track that wallows in ZAPPA dementia and funky WATCHTOWER math-metal meltdown.

3 is a band that takes some getting used to, but chances are, you won't find a more iconoclastic, unique album than "Wake Pig" any time soon. They're only tangentially involved in metal at all, and then only because they pick and choose from whatever genre they feel like, with allegiance toward nothing but their own twisted, charismatic creations. Well worth the support of anyone not too hung up on their own psychosexual demons to get past Eppard's somewhat dainty voice.