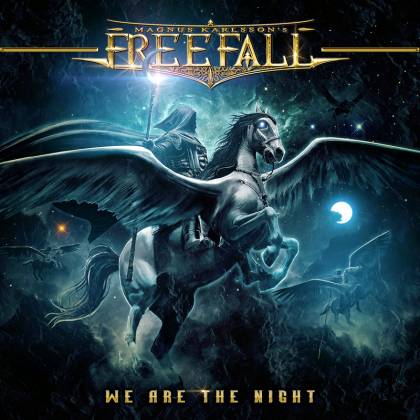 We Are The Night

Hats off, as they say, to MAGNUS KARLSSON. The Swede already has plenty on his plate, what with being lead guitarist for PRIMAL FEAR and routinely charged with putting together projects for FRONTIERS MUSIC, the recent ALLEN/OLZON album included. In fact, it's impressive that Karlsson has found the time to revisit his FREE FALL project, which has produced two previous albums, 2013's self-titled debut and 2015's "Kingdom Of Rock". You may applaud the metal gods for allowing him to complete a third installment, because "We Are The Night" is easily the finest of the three and arguably the most straightforwardly thrilling thing Karlsson has ever put his name to. As with its predecessors, this was performed almost entirely by its titular creator, but with a variety of esteemed contemporary hard rock and metal vocalists pitching in to sing their heads off. It's a simple formula, and here it works brilliantly.

Musically speaking, "We Are The Night" is a grandiose and sonically immaculate heavy metal record, with dense layers of symphonic bombast and an almost comical number of great melodies. "Hold Your Fire" sets the scene with a no-holds-barred explosion of precise, six-string wizardry from Karlsson, but while there is plenty of prime shred on offer here, the songs reign supreme. It helps that "We Are The Night" is graced by the presence of the ever-underrated TONY MARTIN on the spectacular trad-tech anthemry of "Temples And Towers" and the opulent doom of closer "Far From Over". Aside from enabling ageing music journalists to remind everyone how brilliant (four out of five of) Martin's albums with BLACK SABBATH were, his self-evident chemistry with Karlsson's playing and songwriting is a real joy to behold.

Similarly, metalheads with a taste for incredible singers will already know that BATTLE BEAST's Noora Louhimo is one of the greatest metal vocalists of the last decade: here, she revels in the theatrical pomp of "Queen Of Fire", a monstrous power ballad that allows the Finn to fully let her extraordinary voice rip. Elsewhere, current RITCHIE BLACKMORE'S RAINBOW frontman Ronnie Romero demonstrates his effortless class on the misty-eyed but muscular "One By One", and Renan Zonta (from Frontiers Music's ELECTRIC MOB) stakes a strong claim to be a modern great on "Dreams And Scars" and "Kingdom Falls"; both deceptively intricate and multi-layered affairs, with hooks by the busload. Not content with playing every instrument except the drums (which are flawlessly executed by Anders Köllerfors, also a member of Karlsson's STARBREAKER project),our hero even pulls off two strong vocal performances of his own. The zingy, alt-tinged "Don't Walk Away" is particularly impactful, with the guitarist hitting a soulful vocal sweet spot. Meanwhile, scalp-removing instrumental "On My Way Back To Earth" will have fans of blurred-finger showboating salivating (and the rest of us banging our heads).

A powerful and memorable record from one of modern, melodic metal's unsung heroes, "We Are The Night" is an unexpected treat and well worth staying up late for.