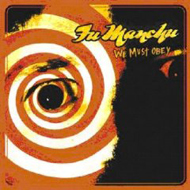 Their sound and van-tastic look may peg them as 1970s worshipers, but it seemed for a while like Orange County stoner rockers FU MANCHU would end up more associated with the 1990s. After prodigious output in the previous decade, including breakout albums like "In Search Of…" and "The Action Is Go", the post-millennial slide has been dramatic for the band. Only two studio albums so far (including 2001's "California Crossing", a disc that so polarized the band's fanbase, it led to the demise of their record label),and an uncharacteristic batch of long silences from the FU camp, might lead some to believe the band's best days are burned up like so much Chevy exhaust.

Well, pack my bong and call me Spicoli, but these guys sound like someone woke them up in the studio and told them to get their asses moving. This is easily the most energetic, consistently ass-kicking FU MANCHU record at least since their mid-'90s glory days, and possibly even tops those. Right off the bat, things are noisier, hookier, and mainman Scott Hill is yowling like he really means it, man, or at least has had a long enough break that kicking out the jams once again seems like a really good idea.

Don't get me wrong, though, FU MANCHU isn't doing anything you won't be expecting – this is still prototypical hesher rock, the pop doppelganger to KYUSS, desert rock that liked KISS more than BLACK SABBATH and skate punk more than heavy metal. They wrote the book on this sound, and while they can turn in a decent LP in their sleep, it's that much better when they're firing on all cylinders, knocking these verse-chorus-verse anthems out of the park with that indefinable something that oozes through the grooves when a band really gives a shit.

"Hung Out to Dry" is almost retardedly simple and catchy, while "Let Me Out" lets drummer Scott Reeder (not the same Scott Reeder who was in KYUSS and released an awesome solo album last year) pretty much run the verse in a riot of snare rolls, and "Land of Giants" uses a backwards snare hit and a slow, lurching tempo to slow things down in fine, heavy-lidded style. The band's cover of THE CARS' "Moving In Stereo" adds another moment of fuzzed-out, brooding brilliance. Even the less memorable songs, like "Didn't Really Try" and "Shake It Loose", are worthy exercises in bong-rock groove and flared-denim sensibility.

"We Must Obey" is a welcome second wind for this long-running band. FU MANCHU have many contemporaries, some more metal, some more doom or "stoner" (whatever that even means),but no one gets the alchemy of this sun-kissed ne'er-do-well soundtrack down quite like they do at their peak. And this is a primo batch of what they have to offer, make no mistake — when the smoke clears, "We Must Obey" may wind up as their best record ever.