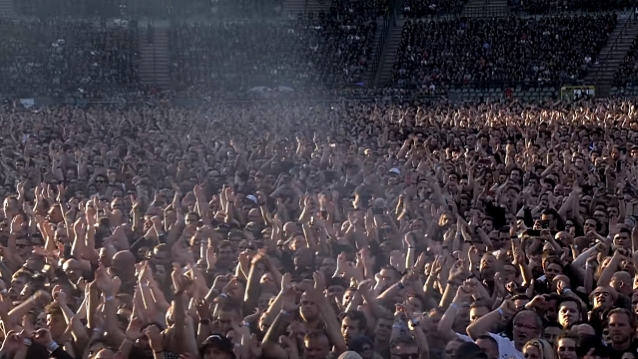 According to Fox 8 Cleveland and Cleveland19.com, a 44-year-old man accused of sexually assaulting a woman during a KORN concert has turned himself in to authorities.

The alleged incident happened on August 16 at the at Blossom Music Center in Cuyahoga Falls, Ohio. Around 11:00 p.m., the 19-year-old victim approached sheriff's deputies, who provide security for events at Blossom, and told them that a heavily intoxicated man grabbed her breasts. She was unable to identify the suspect, but she did provide a picture of him to the police, Inspector Bill Holland said.

"After the incident occurred, [the victim] kind of stepped back and faced him," Holland said. "And at that point, someone was able to take a picture of him and that's what gave us the image to post."

The Summit County Sheriff's Office shared the photo on social media and was eventually able to identify the suspect as Ryan Bollas.

Bollas has been charged with a third-degree misdemeanor of sexual imposition. He posted a $5,000 bond and will be back in court next month.

Ryan H. Bollas, of Northfield Center Township, is charged with assaulting a 19-year-old woman during the Friday concert featuring Alice in Chains and Korn.

HELP US IDENTIFY THIS PERSON

The Summit County Sheriff's Detective Bureau is investigating a sexual offense that was...