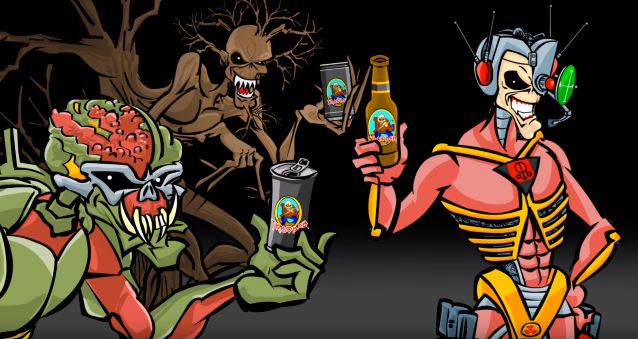 "A Christmas Cheers", an animated Christmas card created by artist Val Andrade for British heavy metal legends IRON MAIDEN as a gift to their fans celebrating an incredible 2015, is available below.

IRON MAIDEN's latest album, "The Book Of Souls", debuted at No. 4 on The Billboard 200, having shifted 75,000 equivalent album units in the week ending September 10. That equaled MAIDEN's highest rank ever, first achieved with 2010's "The Final Frontier".

In terms of pure album sales, "The Book Of Souls" landed at No. 3 on the Top Album Sales chart with first-week sales of 74,000 copies. This marks MAIDEN's best sales week since Nielsen Music started tracking sales in 1991.

"The Book Of Souls" includes "Empire Of The Clouds", an 18-minute track penned by IRON MAIDEN singer Bruce Dickinson, who was recently given the all-clear after being diagnosed with a tumor on his tongue late last year.