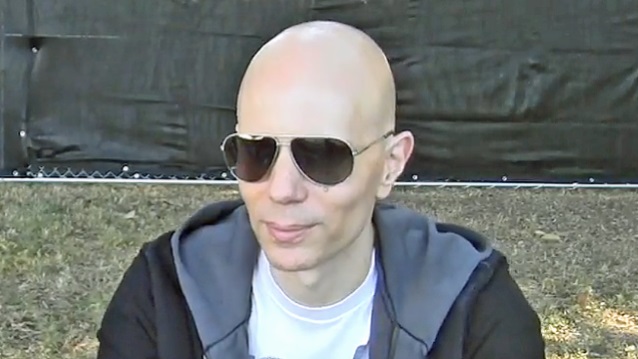 One little-known fact about guitarist Billy Howerdel is that before forming A PERFECT CIRCLE with TOOL singer Maynard James Keenan in 2000, he spent a couple of years working on the GUNS N' ROSES album "Chinese Democracy". Howerdel told Meltdown of the WRIF radio station what he contributed to the record. "I was… you'd call me 'Pro Tools engineer,' basically," he said. "I came in, to start, making sounds for Robin Finck, who I knew from NINE INCH NAILS. He called me and said, 'I just got this offer to come down and play some guitar or get some sounds with GUNS N' ROSES. They want interesting sounds. Can you help me program?' And that kind of turned into this two-and-a-half-year gig with the band. And I became close with Axl [Rose, GN'R singer] and I felt connected and passionate about the project and wanted to see it through. But it was just… it was taking too much time for me, because I had a window of opportunity with A PERFECT CIRCLE that was just catching. And I kind of… I resigned in September of '99 and then we just took off in APC world."

Nearly a decade ago, Howerdel said in another interview that although he was initially brought in to program guitar sounds on "Chinese Democracy", he "wound up hitting it off with Axl," after which his job "kind of migrated into the computer guy. I don't know what you would call me exactly," he said. "I kind of was there all night with Axl as he would work. The band came in during the day with a producer and would work most of the day, and then I would come in ten o'clock at night, say goodbye to those guys, Axl would show up later on, and then we'd do our thing all night and then do it the next day."

"Chinese Democracy", which featured only singer Axl Rose from the classic GUNS N' ROSES lineup, was officially certified platinum by the Recording Industry Association of America (RIAA) on February 3, 2009 for shipments in the United States in excess of one million copies.

The CD came out 15 years after its predecessor, 1993's "The Spaghetti Incident". It took more than a decade and a reported $13 million to complete, during which every original member of the band except Rose was replaced and four different producers were used.

A PERFECT CIRCLE recently announced it had signed a worldwide recording deal with BMG and is in the studio working with producer Dave Sardy on the follow-up to 2004's "eMOTIVe".