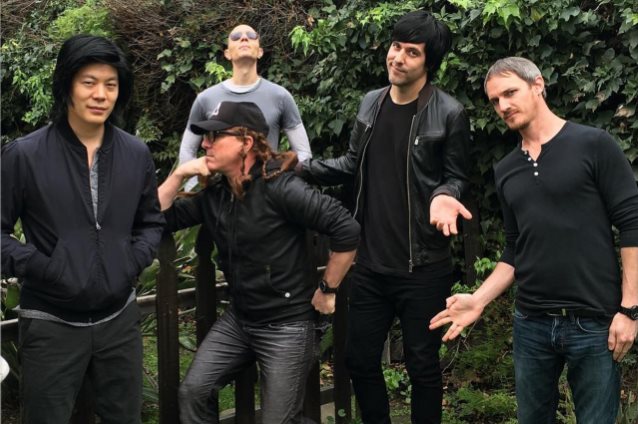 A PERFECT CIRCLE has released its first 2017 group photo, confirming that the band's lineup remains unchanged from the last time they toured four years ago. Joining vocalist Maynard James Keenan and guitarist Billy Howerdel once again are James Iha on rhythm guitar, Matt McJunkins on bass and Jeff Friedl on drums.

A PERFECT CIRCLE is starting work on its first new studio album since 2004's "eMOTIVe" and Howerdel recently said that the band has "every intention" of making new music available to fans in 2017 as it heads out on tour. Speaking with Billboard, Howerdel said: "We're not promising anything, but I have every intention of doing my best to have us playing some new tracks during this run — with the idea that new music is coming very soon after."

The band's tour — its first full-fledged trek since 2011 — kicks off in Las Vegas on April 7 and April 8. The schedule will include appearances at the Welcome To Rockville, Fort Rock and Carolina Rebellion festivals in late April and early May, along with a closing night stop at the Hollywood Bowl in Los Angeles on May 7.

A PERFECT CIRCLE has been largely inactive on the recording front for the past 13 years, with only a new song titled "By And Down" surfacing on a hits collection in 2013.

The group was an instant success when it first came on the scene in 2000 with its debut album, "Mer De Noms", and Howerdel explained a while back how he felt about the band's early success. "I was appreciative then, I'm certainly appreciative now of how everything came together — how all the forces came together and made it happen, and all the timing worked out, with the NINE INCH NAILS tour, opening for them, and, you know, having key people at Virgin Records believe in us and ferociously campaign to market the band in the right way, and Maynard's reputation with TOOL in place... everything just came together."

During the time that the band has been mostly on hiatus, Howerdel launched an act called ASHES DIVIDE, while Maynard James Keenan toured and recorded with TOOL and PUSCIFER while also running a winery.

Howerdel said: "To be honest, I thought [a comeback] would be a few years earlier... It felt like a few years ago it was going to happen, but this is just the way the schedules lined up. But I'm always excited to get the machine back up and going."