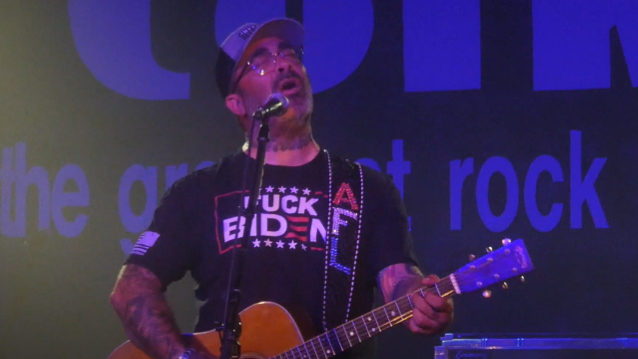 After playing "It's Been A While" at Bottle & Cork earlier in the set, Lewis revisited the track at a later point, only becoming aware of his error as he was finishing the song for the second time.

"You know what I'm realizing right this second? That I'm drunk enough that I should be playing 'Outside' right now, and instead I'm playing a fucking song I already played tonight," he told the crowd. "Which means I might be slightly overserved. So should I play the fucking song that I was supposed to be playing the whole fucking time? Because maybe I might have smoked a little bit too much weed tonight. I will say that's a first. That's a first right there… I'll hear about that one tomorrow. Actually, I'm gonna call you out and we'll see whether you guys out me tomorrow for that. So I guess we'll just see how much y'all love me, 'cause no one else except everybody in this room just saw that happen, so you can give me a free pass. It is entirely and totally up to you, so we'll see whether I'm hiding my face in shame tomorrow, 'cause I have definitely seen a whole lot of cameras recording this, which… super comfortable."

Unlike his other solo acoustic tours, Aaron will be performing with a full band.

Earlier this month, Aaron dropped a new single, "Am I The Only One", from his forthcoming album, to be released later this year. The single debuted at No. 1 on Billboard's Hot Country Songs chart, No. 2 on the all-genre Digital Song Sales and No. 14 on the Hot Oct. 0. The track also drew four million U.S. streams in the tracking week.

Throughout his more than two-decade career, whether topping the charts as front man of hard rock band STAIND, or as No. 1 artist on the country charts as a solo artist, Lewis has always been painfully honest in his music.

"That's all I've ever done," said Aaron. "My songs have always been me wearing my heart, emotions, misfortunes and sins on my sleeve. I don't feel like it would be genuine or worthy if it wasn't."