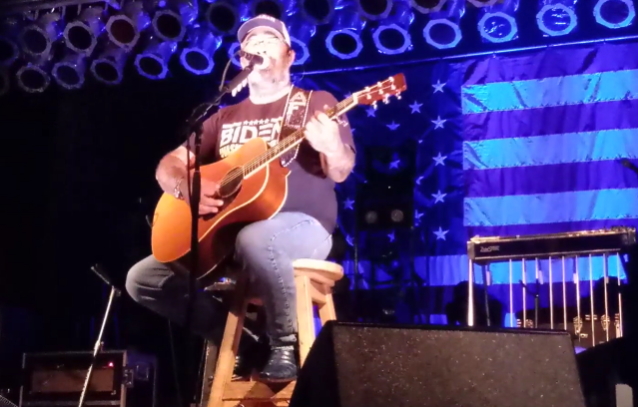 AARON LEWIS Performs New Song 'I Ain't Made In China': 'I'm American As It Gets'

STAIND frontman Aaron Lewis played a new song called "I Ain't Made In China" during his August 4 solo concert at the Psycho Silo Saloon in Langley, Illinois. Fan-filmed video of the performance is available below.

The 50-year-old Lewis, an outspoken conservative rocker who reinvented himself as a solo country artist in the last decade, released his latest solo album, "Frayed At Both Ends", in January.

Aaron first dipped his toes into country music with his 2011 EP, "Town Line". His second full-length album, "Sinner", arrived in the fall of 2016 and was followed by a stand-alone single, "Folded Flag".

STAIND has released seven albums since 1995, the latest being 2011's self-titled effort. The band has had a number of hit songs during its first two decades, including the Top 10 smash "It's Been Awhile" from the No. 1 album "Break The Cycle". Follow-up LPs "14 Shades Of Grey" and "Chapter V" also topped the Billboard chart.

Last summer, STAIND completed a U.S. tour as the support act for KORN.

This past March, Lewis told the Los Angeles Times that he doesn't blindly listen to information that is delivered by the mainstream media.

"I'm not uneducated; I'm actually really smart, and I look for myself. I seek other options of information," he said. "I refuse to believe that a huge, gigantic corporation has our best interest in mind."

Asked where he gets his news, Lewis said: "I have news feeds and people that I follow on Telegram. Dan Ball. Andrew Wilkow. Mark Levin. If I'm gonna watch any sort of news source on television, it's Tucker Carlson."

Pressed about whether Fox News is an exception to his mistrust of corporations, Aaron said: "I think that if Tucker didn't have the following he has, he'd be gone. He's pretty much anchoring the network at this point."

🇺🇸COMMENT your favorite Aaron Lewis Song!
🇺🇸SHARE this post!!
Must do both!
Winner announced TONIGHT (8-1-22)AT 7pm