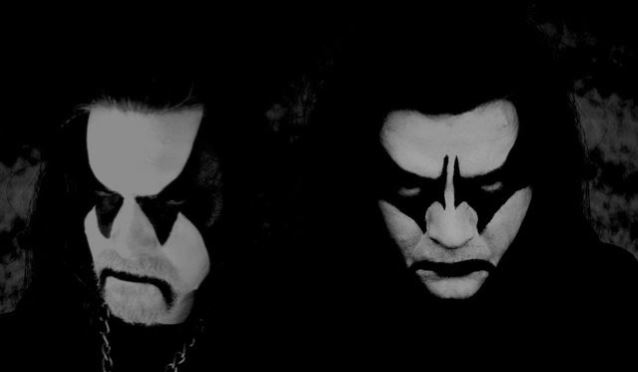 ABBATH-Less IMMORTAL Begins Work On New Material: 'We Will Continue What We Believe In'

Demonaz, IMMORTAL's founding member, has created the material based on his visions of Blashyrkh for nearly 25 years.

Songtitles set to appear on the CD include "Northern Chaos Gods", "Called To Ice" and "Blacker Of Worlds".

"I didn't want to go solo in the first place," Abbath told U.K.'s Metal Hammer magazine. "I wanted the best for IMMORTAL. I didn't want it to end this way. First of all, I just wanted my music out. I wanted to record the [next] album [because] it's been so many years since 'All Shall Fall'. And both Demonaz and Horgh, they have kids and families now, and it just hit that point where I couldn't work the way they wanted to work any more. I wanted things on my terms and they wanted things on their terms, and it was very difficult."

He continued: "I wanted to rehearse at least three times a week, but often it was only once a week and things went so slow. I sat there with all this material, I kept the rehearsal space and recorded the stuff on click track, but it was a very strained atmosphere and the Last time we worked together was in early June last year."

The trademark application from Eikemo was denied on July 21, 2015 and he has snce launched his own band called ABBATH.

"IMMORTAL never stopped; we just had to go through a long legal process before we could go out in the media with the news," Demonaz and Horgh said in a statement.

Asked if the decision to part ways and seek out new band members was inevitable, Abbath said: "I was forced to do it this way. I wanted IMMORTAL to continue, but not the way it was. The dialogue has not been there and it's also my mistake. I should have brought up this shit a long time ago, but IMMORTAL, after Demonaz's problems with his arms, it never became a band after that."

He continued: "IMMORTAL is a very special situation. [Demonaz] hasn't been in the band, but then I always wanted to do the best for everybody, to have the band spirit, and that's why when we decided to start IMMORTAL again, we tried to get the spirit back, and bring him on tour, and just share our thing and be a band and have a kick-ass time. But it never worked out. The chemistry wasn't there with the IMMORTAL guys and hadn't been for a while."

Abbath added: "I believe in my music and I believe in my expression, but time flies and we grow apart. Maybe in the future we can go back again, I don't know, but right now I just want to do my thing and just be ABBATH and have people around me who support that."

Bass duties for ABBATH are being handled by a man familiar to metal fans across the world — Tom Cato Visnes, more widely known as King Ov Hell and main composer for several GORGOROTH albums as well as his own bands OV HELL, with singer Shagrath from DIMMU BORGIR, and GOD SEED, with exceptional black metal vocalist Gaahl. His fellow GOD SEED member and BORKNAGAR percussionist, Baard Kolstad, has also joined ABBATH on drums.