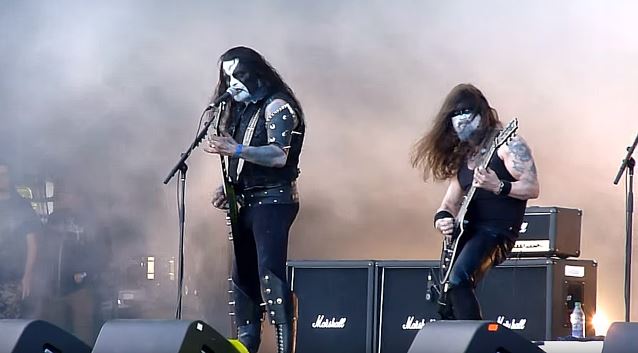 According to Collide, Norwegian session guitarist Per Valla has left ABBATH, the band led by ex-IMMORTAL frontman Olve Eikemo (a.k.a. Abbath).

Valla explained in a statement: "After having played as session guitarist with ABBATH since May this year, I have recently decided that it is time for me to leave the band for personal reasons. I thank the guys for bringing me along on such an awesome ride, and for all the new friends I made in the process. I wish the guys the best of luck in the future."

Valla will continue to play with VREDEHAMMER, which is scheduled to release a new album, "Violator", on February 5, 2016.

Playing drums for ABBATH on the band's upcoming "Decibel Magazine Tour" will be Gabe Seeber of THE KENNEDY VEIL.

ABBATH's self-titled debut album will be released on January 22, 2016 via Season Of Mist.

ABBATH has just released a seven-inch single, "Count The Dead". The A-side features the title track while the B-side consists of a cover version of the JUDAS PRIEST classic "Riding On The Wind".