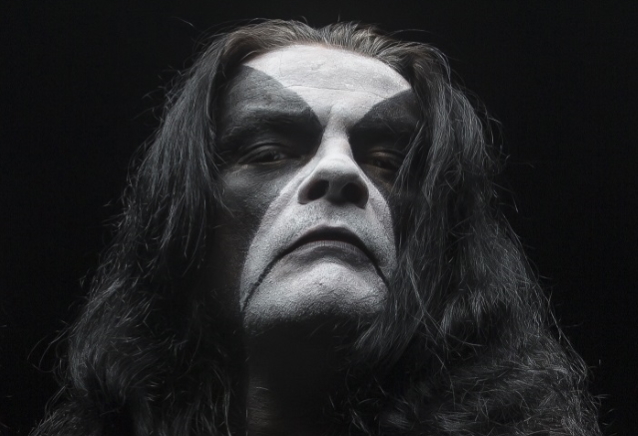 ABBATH Says He Is 'Open' To IMMORTAL Reunion

Ex-IMMORTAL frontman Olve "Abbath" Eikemo says he is "open" to a reunion with his former bandmates.

Abbath and his childhood friend Harald "Demonaz" Nævdal started IMMORTAL in 1990. Six years ago, Abbath and the rest of the group went through a bitter breakup.

"The other guys in the band said I had a drug and booze problem," Abbath told journalist Martin Blekkerud of Norway's Dagbladet newspaper for today's edition of the Dagbladet Magasinet. "But I never bothered them with that stuff. They only used it as an excuse [to get rid of me]."

Olve used to be married to Demonaz's sister, and they share a son, Torbjørn. Torbjørn is now 26 and a drummer.

Abbath and Demonaz haven't spoken to each other since the guitarist/vocalist exited IMMORTAL.

Asked if he thinks he could ever reunite with IMMORTAL, Abbath said: "IMMORTAL reunion? Hmm. I got a text from Horgh [IMMORTAL drummer Reidar Horghagen] saying it was great that I got sober. Harald and I haven’t spoken at all. But there's no evil blood or bitterness on my part anymore. I realize that I was a part of the problem. Things are great for me now. But am I open to an IMMORTAL reunion? Yes, of course. But it has to be something special. I just wish we could sit down and have a talk about things when it all went to hell, instead of involving lawyers."

Dagbladet's entire Norwegian-language interview with Abbath can be found at Dagbladet.no.

The highly publicized legal battle in 2014 over the rights to the IMMORTAL name pitted Abbath against Demonaz and Horgh, with Abbath claiming the pair abandoned IMMORTAL after they moved their gear out of the band's rehearsal space. The Norwegian court systems determined otherwise, and awarded the IMMORTAL name to Demonaz.

Abbath is now the frontman of his namesake band, which released its second album, "Outstrider", last July via Season Of Mist.

In a 2018 interview with Distorted Sound, Demonaz said that he wasn't worried about any negative backlash about IMMORTAL continuing without Abbath. "I was really confident with it, as we know how this band functions and we know how the music was made and how IMMORTAL functions," he said. "A lot of people probably thought IMMORTAL was Abbath's band as he is always quite visible live; he was the face of the band in that way. When people [hear] the ['Northern Chaos Gods'] album, it's a different story. It sounds IMMORTAL. It is IMMORTAL. I couldn't change that even if I wanted to. It's how I make the music."