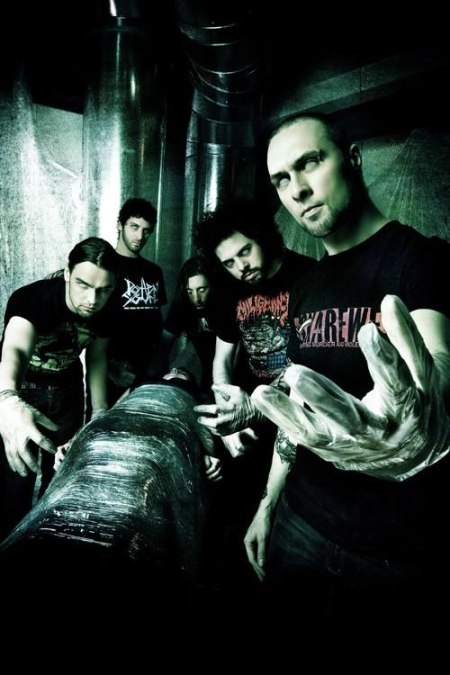 "Besides ABORTED I have been busy with the release of the SYSTEM DIVIDE record, and further working on Avernus studios (graphic design studio) and Skarewear (serial killer/horror clothing line). Ken [Sorceron; guitar] has been busy with ABIGAIL WILLIAMS who also just released a new album and are touring at the moment. Dirk [Verbeuren; drums] has been busy touring with SOILWORK and Jb [Van De Wal; bass] just recorded the new WHORECORE album, etc.

"As you see, we have all been busy on different levels. This, however, does NOT mean we are not working on ABORTED stuff. Have no fear, fellow misanthropes, we are hard at work on writing the next album.

"There won't be much shows until we actually have the record out, but when it hits, expect it to hit hard!!! So far about eight songs are written. The aim is to have about 11 ready for the record and two bonus tracks because, well, 2011 is going to be a special year for ABORTED. More about that later! We have the whole concept written out and there won't be any spoilers yet but I think there will be quite some surprises for everyone, in a good, horrific ABORTED way, of corpse! The material itself is definitely good ole ABORTED. As we said with 'Coronary Reconstruction', we are getting that old-school brutal vibe back mixing it up with some newer stuff. All I can say is this is definitely some [of], if not the most punishing material the band has ever written, we are going to bpms that we never went to before, some of the riffing is pretty damn technical. Imagine a bastard child of 'Engineering The Dead', 'Goremageddon' and 'Archaic' on steroids. That, and of course, some new elements as we don't really like to write the same record twice. All this to say that we are busting our nads to get you guys the best album we can possibly get done. Expect it to be out September 2011. More details and all that yazz to be revealed soon.

ABORTED's recent "Machines Of Grind/Terrorizer Tourture" European tour with ROTTEN SOUND was the first trek featuring the band's new lineup, which released a new EP entitled "Coronary Reconstruction". The EP got released on a limited-edition digipack sold through the band and Indiemerch containing four new tracks and a cover of ENTOMBED's "Left Hand Path".

The artwork for "Coronary Reconstruction" was created by Justin Osbourn from Slasher design and comprises the most gruesome and disgusting art the band ever had.