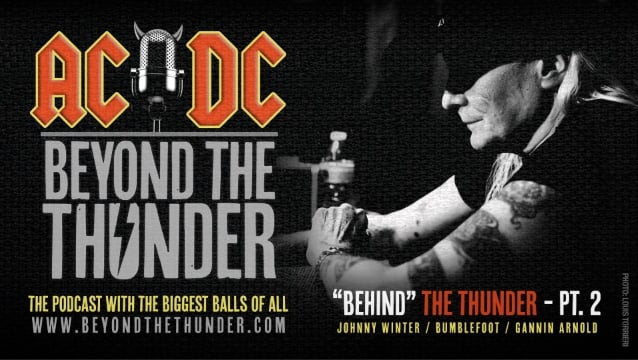 The creators of "AC/DC Beyond The Thunder" podcast serve up a special bonus episode prior to the launch of Season 3 by answering listener questions from around the globe while cueing up never-before-heard interviews from guitar virtuosos Ron "Bumblefoot" Thal (GUNS N' ROSES, ASIA), Gannin Arnold (JOE WALSH, TAYLOR HAWKINS & THE COATTAIL RIDERS) and even advice to AC/DC from the late, great bluesman Johnny Winter himself.

Show hosts Kurt Squiers, Gregg Ferguson and Eric Kielb take fans behind the scenes for a second time during the show's history. The podcast, known predominantly for featuring famous AC/DC fans who've been influenced by the band's music, turns the spotlight on listener questions from Australia, England, Germany, Spain and the United States, with one listener asking, "Have you ever approached individuals who have actually influenced AC/DC?"

The episode surprisingly jumps into a never-before-heard interview with Winter, describing his love for the blues, the highlight of producing his own hero Muddy Waters, and even serving up a little parting advice for AC/DC — but not before making known his dissatisfaction with Rolling Stone magazine's "Top Guitarists Of All Time" list, being ranked rather low alongside Angus Young.

"I definitely think I should be in the top five," he laughed, but then turns pensive, "It's got to have emotion. It's got to have feeling to it. No matter how good you play, if you don't feel it, it doesn't translate well."

The show also catches up with Thal, who discusses being influenced at the age of 10 by Angus Young, then finding his on-stage presence with GN'R by watching vintage AC/DC concert videos, and also sharing a strong affinity for the band with Axl Rose.

"With Axl, there was one point we were even jamming an old AC/DC tune that we're thinking about covering. We did 'Beating Around The Bush'. We did 'Problem Child'," recalls Thal, also remembering another poignant moment, "When we were in Perth, we drove up to Fremantle and visited Bon Scott's grave to pay our respects."

The episode closes with an interview from Arnold, who's played with both Joe Walsh and TAYLOR HAWKINS & THE COATTAIL RIDERS. "If you go in the studio and just record something that sounds AC/DC-ish, it's not going to be cool because it's already been done," he says. Arnold also breaks down the AC/DC sound on guitar and performs the full-length theme song which he custom-wrote for "AC/DC Beyond The Thunder".