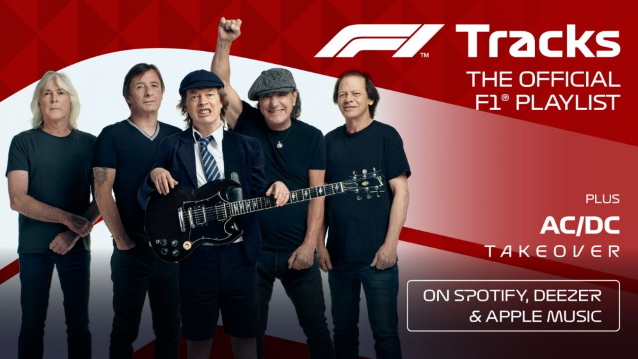 Ahead of the launch of AC/DC's 17th full-length album, "Power Up", this Friday, the band's first new music since 2014, the legendary rockers have curated a 47-song F1 Tracks takeover playlist featuring some of their greatest hits.

The playlist for this weekend's Turkish Grand Prix features iconic hits from the band such as "Highway To Hell", "Back In Black", "Thunderstruck", "You Shook Me All Night Long" and "T.N.T.", which mirror the fast-paced nature of F1 and illustrate the feeling of elation for drivers on the podium.

In the recent 70th anniversary fan takeover playlist, AC/DC was the most suggested artist, making the band a firm favorite with F1 fans.

The full AC/DC F1 Tracks playlist can be found on Spotify, Deezer and Apple Music.

AC/DC singer Brian Johnson is a longtime race car driver who won a sports car enduro at Daytona in November 2016. The singer, who forced into a temporary retirement due to a hearing impairment, had previously said that his most critical hearing issues weren't rock related, but rather a burst eardrum suffered in his race car.

Johnson stated about his love of cars: "A few years ago, AC/DC did a gig at the Nürburgring racetrack in Germany. There were 119,000 people gathered on the hills and stands. It was wonderful to stand up there with the band, but when I was on stage singing, I thought, I wish I could drive this track.

"I was once racing a Porsche when the engine of the car in front blew up. Driving through a wall of smoke, with oil all over the windscreen, I couldn't see a thing. At times like that you wonder if you will emerge alive. Now I count myself as a lucky man in that I get the opportunity both to sing and to drive."