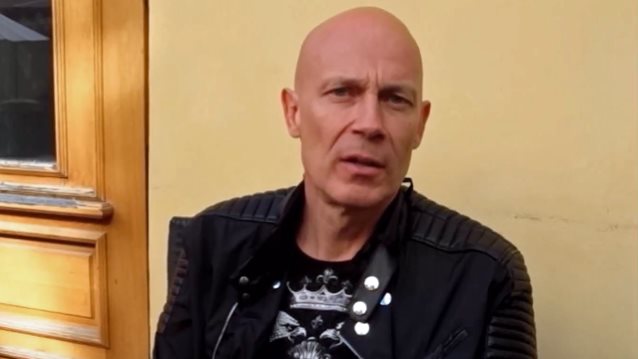 ACCEPT Guitarist: 'As Long As The Fans Don't Get Tired Of What We're Doing, I Think We're Doing Fine'

Sweden's Metal Covenant recently conducted an interview with guitarist Wolf Hoffmann of German/American metal veterans ACCEPT. You can watch the entire chat below. A few excerpts follow (transcribed by BLABBERMOUTH.NET).

On whether the band's new "The Rise Of Chaos" album was designed to be an extension of the band's previous effort, 2014's "Blind Rage":

Wolf: "I think it follows a straight path that we started three albums ago. We're trying to not leave that path. We're really trying to go forward and not go left and right and change anything dramatically. We're really just trying to give the fans what we started back then. I think we have a style that works. We have a great team of people now: producer, singer, label, everybody. We're not trying to change a winning team. We're just trying to write new songs along the same lines with new ideas we didn't have before."

On how he would react if someone told him "The Rise Of Chaos" was "just another ACCEPT album":

Wolf: "I don't see a problem with that, really. You don't have to change all the time. We're trying to not change. We're trying to get better and have new songs for the fans, but to change is always easier than I think to not change. To do something consistently in a certain quality over a longer period, I think that actually gets harder and harder. It's always easy to do something that you haven't done before, because it's new. But when you do something that you have been doing for a while, you're only trying to follow a style that you already have, that's a challenge. I think we're doing alright. Once you have a style, you should be happy and work with that. That's what we're trying to do. We have certain ingredients that work for us and we're trying to use them. As long as the fans don't get tired of what we're doing, I think we're doing fine."

On whether he worries his trademark guitar sound will result in too many similar-sounding ideas:

Wolf: "Of course. It goes back to what I said earlier: You have to be your own worst critic. Sometimes, I play to somebody or play to Peter [Baltes, bass] and ask other people's opinion, but especially when it comes to playing [my] solo stuff, I'm pretty much left to my own, mostly. I don't know who to ask. When it comes to songwriting, I can ask Gaby [Hoffmann, Wolf's wife and ACCEPT's manager] or [producer] Andy Sneap or I play it to Peter and get some reflection. When it comes to solo stuff, I play it to Andy a lot and if he says, 'Hey, that's a bit too close to what you've done already,' I'll go back and change it. A lot of times, these solo bits and pieces, they happen at the very end. They're usually the last thing I do. Once we've got ten strong songs, I go to work on the middle sections and riff sections and very last, I put the solos on. At that point, they're usually the only ones I worry about if they're any good."

On whether he thinks it's more important to play it safe with ACCEPT's sound rather than experimenting:

Wolf: "At this point in our career, I think so. I wouldn't really see the point in doing that right now. We kind of know what works and what doesn't. We've done a bunch of experimenting in the past where we tried a more commercial approach or in the '90s, we were sort of trying to find or re-define our style with going, you know, trying to go with the times, if you want. All of a sudden, it was all about grunge, so we tried to sound a little different. We just didn't feel comfortable doing it. The result wasn't even that great. It's almost out of our system at this point. I don't really see the point in doing that. I'm quite glad we have a style and that we are recognizable. As soon as you put the album on, you know that it's ACCEPT. That's a good thing. So, why mess with it?"

On the band's new drummer, Christopher Williams, who is several years younger than the core members of ACCEPT:

Wolf: "Once you get to know Christopher, he's really, first of all, thirty is not a kid. We still are like kids. Somehow, we meet in the middle. He's a little bit of an older soul. He's really familiar with a lot of '70s and '80s rock stuff that he's always been a fan of. I never think of him being younger than we are. Of course, he is. Sometimes it comes across, but mostly, it's not really on anybody's mind. And for a drummer, being thirty years old, he's at the top of his game. He's really, he's got the chops, so there's that. Who wants to have a sixty-year-old drummer? It's a young man's game. They're all used up by the time they are fifty, so we needed fresh blood, so we got a young kid. He's going to last thirty more years."

On how "The Rise Of Chaos" would have fared if it were released in 1986:

Wolf: "Nobody knows, of course. That's an interesting point because I often think an album is only…you can't judge it by itself. And who knows if we would have released 'Blood Of The Nations' ten years prior, if it would have been a success. Maybe the times were ready for ACCEPT and that album, but maybe ten years ago or ten years later, they wouldn't have been. That's interesting. I believe sometimes the world isn't ready for something and that goes for music, especially. When it's totally uncool, it can be totally cool ten years later or five years later. It's like fashion, almost."

"The Rise Of Chaos" was released on August 4 via Nuclear Blast. The follow-up to 2014's "Blind Rage" is the first ACCEPT album to feature the band's latest additions, Williams and guitarist Uwe Lulis (GRAVE DIGGER, REBELLION).