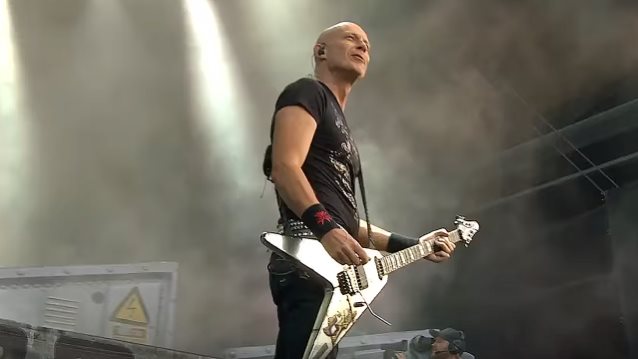 ACCEPT Guitarist WOLF HOFFMANN: 'We Made A Vow That We're Never Going To Be A Nostalgia Band'

Brazil's Heavy Talk conducted an interview with guitarist Wolf Hoffmann of veteran German metallers ACCEPT prior to the band's November 15 concert at Teatro Ademir Rosa (CiC) in Florianópolis, Brazil. You can watch the entire chat below. A few excerpts follow (transcribed by BLABBERMOUTH.NET).

On the creation of the band's new "The Rise Of Chaos" studio album:

Wolf: "I'm not sure that we even have a concept, to be honest. We never really do. We just have a collection of songs. We really just write songs until we feel we got an album's worth of material then, at some point, we obviously have to think about the title. In this case, we chose 'The Rise Of Chaos' because it seems to fit the times that we live in, first and foremost. If you look around the world and watch the news today, it feels like there's a lot of chaos. 'The Rise Of Chaos', it's getting stronger and stronger. So, it seemed to be a fitting title. That's really the only reason. We never really do concept albums."

On the involvement of new members Uwe Lulis (guitar) and Christopher Williams (drums):

Wolf: "In this case, the album wasn't really done much different from the previous ones. We used the same producer and the same guys writing the songs, Peter [Baltes, bass] and myself, we're the main guys. It's great to have two new guys onboard, but they didn't really change the process all that much, to be honest. We're a machine that's sort of working really well. We're glad to have them onboard, but that really didn't change it that much."

On the importance of ACCEPT continuously writing new material:

Wolf: "I think it's very important, especially for us. We felt when we got back together with Mark [Tornillo, vocals] or we got a 'rebirth' about ten years ago, we made a vow that we're not going to be a nostalgia band. We really didn't want to be a band who plays old stuff over and over again because there's enough bands doing that already. We felt if we're going to do this, we want to do it right. We want to write new material that can be on an even level with the stuff that we've done in the past and by all accounts, I think we've achieved that with these last four albums. That's maybe one reason why we've made four albums in nine years, plus a live DVD. I think we've been really productive in all these years. I think we're going to do that as long as we can. We like it. It's fun to do stuff that's relevant and meaningful to people. That's really the main motivation for us is to have stuff that is relevant."

On whether ACCEPT would ever play one of their classic albums like "Restless And Wild" or "Balls To The Wall" in their entirety live:

Wolf: "Probably not. If you've been around for as long as we have, you could do a celebration or anniversary every year. I think it's overdone by so many people. It's become a little bit of a fad and sort of a marketing trick in my mind. I'd much rather concentrate on what we're doing now than all this anniversary stuff. Don't hold your breath on any anniversary tours."

On ACCEPT's future plans and whether Hoffmann has any big goals for the band:

Wolf: "We achieved a lot of things. I don't really have any specific goals. Maybe a Nobel Prize for heavy metal. [Laughs] But that's unlikely. I don't know, man. We just enjoy what we're doing. I don't think there's as much you can really work for in our stage right now. We're totally happy where we are. We always want to get bigger and always want to make better albums. That's always my goal. Right now, we have so many things in our pipeline, that I don't even know where to begin. Right now, we're in the middle of the South American tour. And of course, we're going to start our headlining tour in January and February, big festivals next year. We're plenty busy right now."

On whether his passion for photography ever coincides with how he visualizes ACCEPT:

Wolf: "A little bit. I've always been sort of a visual person in a way. I had a certain knack for these things. So yeah, I get involved in band photography. I do all kind of things around the band, but it's probably less than you think because in a way, it's two different worlds. I enjoy photography a lot and I still do to this day and there's a lot of similarities with photography and music. They're both artistic. There's a lot of things that you could compare, definitely."

"The Rise Of Chaos" was released on August 4 via Nuclear Blast. The cover artwork for the disc was created by the Hungarian artist Gyula Havancsák.