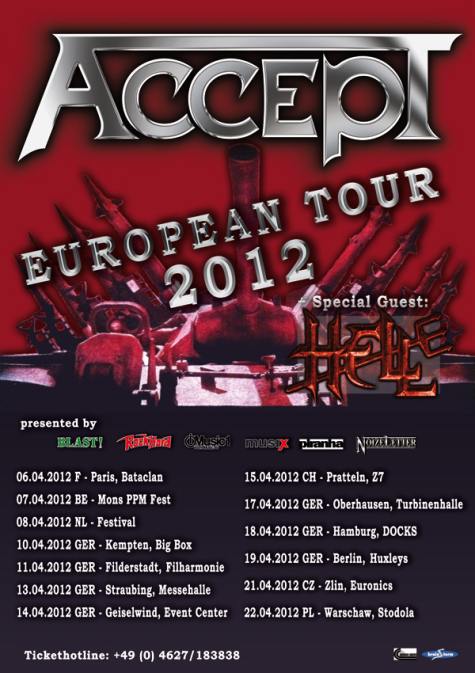 Fan-filmed video footage of ACCEPT's April 21 performance at Euronics Hall in Zlín, Czech Republic can be seen below.

"Stalingrad" sold around 5,400 copies in the United States in its first week of release. The band's previous CD, "Blood Of The Nations", opened with around 2,900 units back in September 2010 to land at position No. 187 on The Billboard 200 chart.

"Stalingrad"was made available in the following formats:

Regarding the musical direction of ACCEPT's new album, Hoffmann told The Rock Pit last year, "We're just gonna have the same attitude, the approach; we're just gonna do more of the same, you know, without it being the same. More similar-style stuff, hopefully fresh new ideas. And I mean, we're not gonna… The intention is not to change it right now. I mean, why would we? . . . But I have to say, it's always easier said than done. It's incredibly difficult to write songs that are sort of reminiscent of the past but they're not, you know, rip-offs of your own music. That sounds incredibly very simple, but it's really not, especially if you have a sort of history of 15 albums or whatever we have. Then there are always similarities that you have to avoid. It can't be too close, but it can't be too far away from it. So it's a pretty fine line that you have to walk sometimes, but, you know, hopefully we'll manage again."