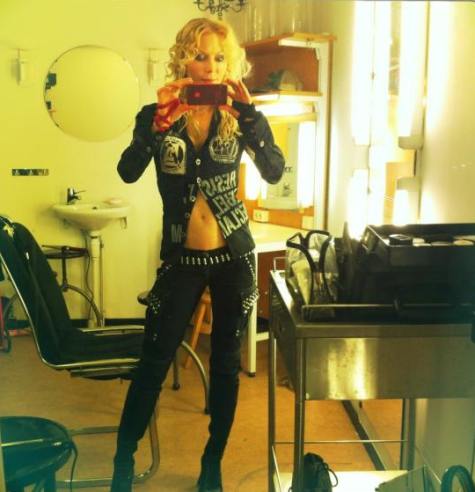 "Under Black Flags We March", the new video from Swedish/German/American extreme metallers ARCH ENEMY, can be seen below. The clip was filmed last month with Patric Ullaeus of Revolver Film Company, who has previously worked with DIMMU BORGIR, LACUNA COIL, IN FLAMES, SONIC SYNDICATE and KAMELOT, among others.

Commented ARCH ENEMY guitarist Michael Amott: "It was a pleasure as always to work with our friend Patric Ullaeus on this video, which will be the fourth clip he's made for us and he really is a consummate professional — truly excellent stuff! He's captured a very suitable and cool vibe on this one too. The track itself, 'Under Black Flags We March', is a song that we've played at every ARCH ENEMY show since we released the 'Khaos Legions' album last year. We love playing it as it's a change of pace in our frantic live set and it's going down really well with audiences worldwide too. We felt this pounding metal anthem deserved a visual companion, so here it is!

"A couple of things to listen out for: we had a our new guitarist Nick Cordle throw down a little lick on the song and had audio master Andy Sneap remix the song a little... So, a few minor tweaks here and there to make it something special for this visual/sonic assault!"

"Under Black Flags We March" comes off ARCH ENEMY's ninth album, "Khaos Legions", which sold around 6,000 copies in the United States in its first week of release to enter The Billboard 200 chart at position No. 78.

"Khaos Legions" was released in Europe on May 30, 2011 and in the U.S. on June 7, 2011 via Century Media Records. The CD marks the band's return to new, original material, after the release of the "Tyrants Of The Rising Sun - Live In Japan" live DVD/CD (2008) and the re-recordings album, "The Root Of All Evil" (2009). The effort was tracked at Sweet Spot Studio in the south of Sweden with engineer Rickard Bengtsson (who produced 2005's "Doomsday Machine").