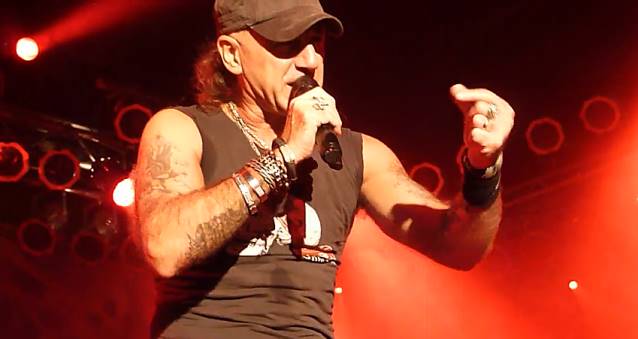 ACCEPT's MARK TORNILLO: 'I'm The Luckiest Guy On The Planet'

Vocalist Mark Tornillo of German / American heavy metal legends ACCEPT was interviewed on the latest episode of the "Focus On Metal" podcast (web site). You can now listen to the chat using the audio player below.

Asked how ACCEPT manages to keep its songwriting fresh so far into the band's career, Tornillo said: "I'm the luckiest guy on the planet to have the writers that I'm writing with now. Wolf [Hoffmann, guitar] and Peter [Baltes, bass], I mean, they've been banging this stuff out for years and years and years, and it's really just the two of them that just keep coming up with these riffs and these ideas. And they'll put songs together, and a lot of times it'll be their hook ideas as well, and I'll just write the lyrics. But it's kind of hard to say, man. I mean, there's still a lot of juice left in the old bin, I think. We're just fired up about playing and we're fired up about writing. I think the creative part is the best of the whole thing — for real. That, and playing live."

Tornillo also spoke about how he has managed to fit in so well with his ACCEPT bandmates despite the fact that he spent much of his early career playing East Coast bars with TT QUICK while the other guys were raised in Germany and schooled on European metal.

"It is kind of bizarre, isn't it? [Laughs] It really is," Tornillo said of the chemistry between him and the other members of ACCEPT. "But, I mean, at the end of the day, it's like the old saying, we went to different schools together. What they were doing in Germany, we were doing here… we were trying to, at any rate. It's all rock and roll at the end of the day. But we all had the same love for the music and not a lot of nonsense to go along with it. That's really the key to ACCEPT — I think it probably always was — that there's not a whole lot of B.S. going on behind the scenes and people doing stupid stuff that's gonna show up in the tabloids and whatever else. It's about the music."

ACCEPT's new album, "Blind Rage", sold around 6,400 copies in the United States in its first week of release.

"Blind Rage" was released on August 15 via Nuclear Blast. Like its two predecessors, 2010's "Blood Of The Nations" and 2012's "Stalingrad", the new effort was helmed by British producer Andy Sneap, who has previously worked with MEGADETH, EXODUS, TESTAMENT, ARCH ENEMY and KILLSWITCH ENGAGE. The cover artwork was created by Daniel Goldsworthy.

The "Stampede" video was filmed on location in the high desert of California at the Devil's Punchbowl (a rock formation that looks like it's from another world) with director Greg Aronowitz ("Batman & Robin", "A.I. Artificial Intelligence", "The Lost World: Jurassic Park").