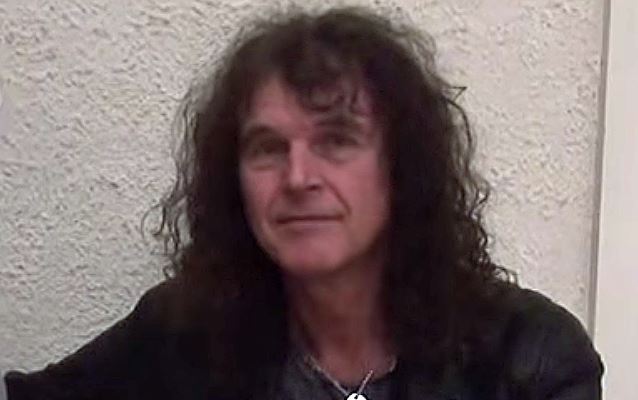 Kaaos TV conducted an interview with ACCEPT bassist Peter Baltes before the band's June 5 performance at the South Park festival in Tampere, Finland. You can now watch the chat below. A couple of excerpts follow (transcribed by BLABBERMOUTH.NET).

On the recent departures of guitarist Herman Frank and drummer Stefan Schwarzmann:

"It's very simple. Stefan and Herman had the possibility to form their own project, or be part of something, and I guess that's what they always wanted. So they, kind of, you know… went that route, and we regrouped and found some new people. We had a couple of weeks to do that, but we did. And we're really happy now. I mean, we've got a great drummer [Christopher Williams], and with Uwe [Lulis; GRAVE DIGGER, REBELLION], we've got a great guitar player. So it's all good. We rehearsed hard. And here we are."

On whether he and ACCEPT guitarist Wolf Hoffmann knew that Stefan and Herman were thinking about leaving the band:

"You don't really know. No, we didn't. I mean, you never know. We knew that there was gonna be a project, but that they were gonna leave, we did not know. So… I don't know. You never know."

On whether they had specific people already in mind as potential replacements for Stefan and Herman:

"No, not really. But Wolf and I live in Nashville, so we wanted somebody local. We found Christopher, who's an incredible drummer. And then Uwe, almost, was an obvious choice, because he plays our style, and he was working with us for two years, so it was a logical conclusion for us to say, 'You know what? Why don't we try Uwe out?' He's a great player and he loves to play. So that's what we did. We didn't have to look far, which is nice."

On how Uwe and Christopher are working out so far:

"Absolutely well — really, really well. I mean, Uwe is playing really good, and he's really precise and everything, and Christopher just has an incredible groove. He just fit right into the ACCEPT groove, and he's a wild guy, a wild drummer, so, for us, it's almost seamless. We're really, really happy now as a band; we're sounding good, and everybody's saying it, so… we're happy."

On whether Uwe and Christopher have injected new blood into the band:

"Absolutely. That's always the case. It's really rare, and it almost never really happens that a band stays together from Day One for forty years — you can't. So it is nice to have fresh blood, because everything is new for Christopher, and he loves it. We look at him and we're, like, 'That's how we used to be.' And he plays really hard, and he tries really hard. Actually, it is infectious a little bit. It is good for us too. You see somebody else get so excited. We're always excited, but we just get excited looking at him. It is really like a shot in the arm; it's really nice. And I think the future's gonna be very bright for ACCEPT as a band. I'm looking forward to the next album, how this is gonna work out. We're really in a good situation right now."

On ACCEPT's plans to write and record the follow-up to 2014's "Blind Rage":

"After this tour, when this year is over, Wolf and I are gonna go back and then start working on the new album. And we'll take our time — the same [as we did] with 'Blind Rage'. I think that was one of the reasons it was so successful — because we really took our time. We took a year to write the songs. And we had time in between to stop and then look back: 'Is it good enough?' Sometimes you have to step back for a couple of weeks. It's a luxury usually you don't have. Everybody wants you to just 'finish, finish, finish.' So we said no. We're gonna wait 'till it is really, really what we want. So we're gonna do the same here."

"It is an absolute luxury to have the time to say, 'We're gonna take a year to write this album, and then record it.' The recording process is fairly simple and easy; we've been doing this forever. It's writing the songs, crafting them, and writing songs that people [will] listen to [many years later]. I mean, 'Balls To The Wall' will always be there…. 'Metal Heart', 'Fast As A Shark'… Now you can say 'Teutonic Terror' will always be there. Every album has these songs that are, like, cornerstones. And that's what we're after. And when we write songs — Wolf and I — we're always thinking about what the fans wanna hear. Can we play this live? If we can't play it live, we don't wanna record it, because then it's just an album track. We wanna be able to, every song… Can we pull that off live? How would that be? Would the fans like it or is it just…? Is there a groove they would love? If it's a really stale groove, even if it's a great song, we're not doing it. And we always have that in mind that, 'Okay, in essence, we could play the whole album live, if we wanted to.' And that's a cool feeling, and that's what we're after, and that's why we're taking our time." 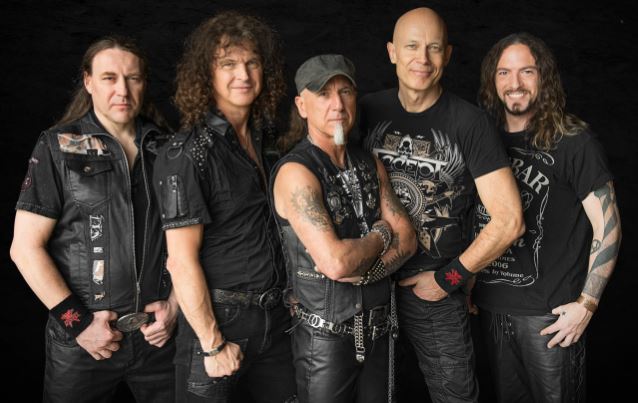