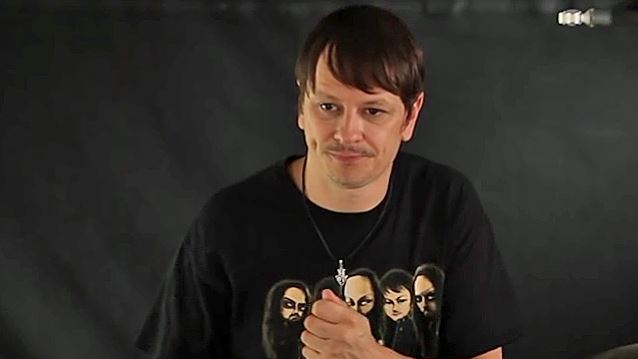 KORN drummer Ray Luzier was interviewed by Canadian rock journalist Mitch Lafon for a recent edition of the "One On One With Mitch Lafon" podcast (Facebook page). You can now listen to the chat in the YouTube clip below.

Asked if he thinks it still makes sense for bands to record full-length albums instead of focusing on releasing individual tracks, Luzier said: "I'm one of those weirdos… I mean, I'm also 44… But I'm one of those guys who still goes to Best Buy and Target and I'll download… buy albums on iTunes, 'cause I believe in supporting the artist. I know how hard it is for us to work on a record. And it's twelve dollars. You can't afford that? I don't believe that."

He continued: "Yeah, people are coming to the shows, and you can't replace live entertainment, but at the same time, it's a huge deal to me to support what… We're in there for four to six months recording a record, pouring our blood and sweat into it… Buy the friggin' record, man. It's not a big deal…."

Luzier added: "I love the Internet, 'cause it's instantaneous. You can put a song out, and two minutes later it's in Germany, and people can listen to it in full stereo, with full production. But I've had KORN fans bring up CD-Rs to me, blank CD-Rs, with [KORN's latest album] 'The Paradigm Shift' on it, asking me to sign it. And I'm, like, 'Really, dude?' [Laughs] 'You're asking me to sign a blank CD.' 'Yeah, but I'm at your concert and I bought a ticket.' And I'm, like, 'Yes, you did. But the CD is twelve…'

"So I go back and forth. It really upsets me, 'cause I'm one of those old-school guys. But I'm not gonna fight it. [Today's show] is sold out. [We're playing] Carolina Rebellion [and there] is over 45,000 people here. Rock is far from dead, man."

First-call touring and session drummer, Luzier is known for his high-profile gigs with David Lee Roth, Jake E. Lee and ARMY OF ANYONE, and has been a member of KORN since 2007. From movie soundtracks to rock and metal albums, Luzier's playing can currently be found on over 70 recordings. As an educator, he was a Musicians Institute instructor for over 10 years and author of a well-regarded, self-titled instructional DVD.