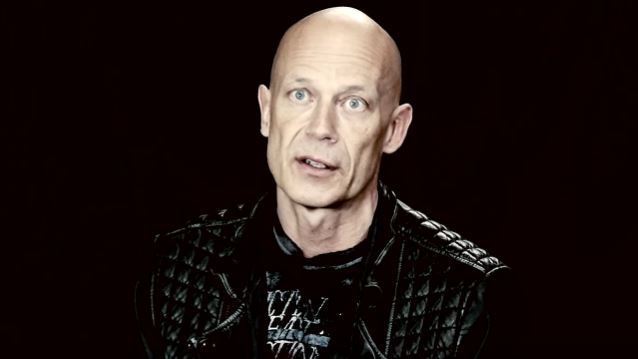 Metal Temple magazine recently conducted an interview with guitarist Wolf Hoffmann of German/American metallers ACCEPT. You can now listen to the chat below. A couple of excerpts follow (transcribed by BLABBERMOUTH.NET).

"We've toured on this album longer than we ever had before, we just realized. Last night we were just talking, it's been a year and what… a year and a half now that it's been released. And we've been on the road ever since, and there's no stopping. We're gonna go back out here in a month again and then in the spring yet again, and after that, it's surely time to start working on a new album. But the reaction has been phenomenal."

On the inspiration for making new music:

"The inspiration for us to make an album is always the same: we just want to continue the legacy of ACCEPT and write songs that are totally ACCEPT style, but at the same time have something that's current and interesting. When we regrouped with Mark [Tornillo, vocals] about five years ago, we always said to ourselves, 'We're not gonna be just sitting back on the past success and play the old songs.' We wanted to start a new chapter and make albums that are relevant to fans. And that sounds easy, but it's not really that easy, or else everybody would do it. So we would try hard to come up with songs that totally feel familiar on one hand, but that, on the other hand, they sound modern and can compete with what's going on today."

"Blind Rage" was released in August 2014 via Nuclear Blast. Like its two predecessors, 2010's "Blood Of The Nations" and 2012's "Stalingrad", the new effort was helmed by British producer Andy Sneap, who has previously worked with MEGADETH, EXODUS, TESTAMENT, ARCH ENEMY and KILLSWITCH ENGAGE. The cover artwork was created by Daniel Goldsworthy.