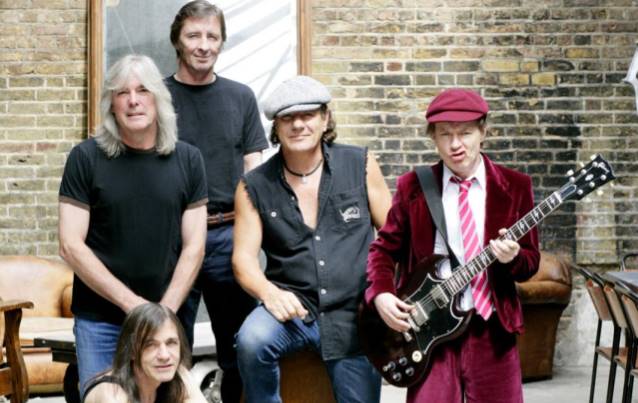 According to ACDCFans.net, AC/DC's gear has arrived at the Warehouse Studio in Vancouver, British Columbia, Canada, where the band will be working from May through July with producer Brendan O'Brien (AEROSMITH, PEARL JAM, RAGE AGAINST THE MACHINE, STONE TEMPLE PILOTS),who also helmed 2008's "Black Ice". The group's next CD is tentatively due before the end of the year.

AC/DC earlier in the month issued a statement confirming widespread reports that founding guitarist Malcolm Young was stepping away from the band due to illness. The statement, however, refuted rumors that the group was breaking up as a result, saying that the legendary Australian act will "continue to make music."

The statement did not indicate the nature or extent of Malcolm's condition, but several Australian reports indicated that he may have had a stroke last month that left him unable to perform, either live or in the studio.

One source told The Age that the Young family was mulling full-time care for the guitarist, who was said to be having difficulty remembering familiar faces and communicating.

While plans for a tour to mark the group's 40th anniversary remain unclear, singer Brian Johnson told the U.K.'s Telegraph that the band was "definitely getting together in May in Vancouver" to begin work on its 16th studio album.

Without naming Malcolm, Johnson also said in the interview, "One of the boys has a debilitating illness, but I don't want to say too much about it. He is very proud and private, a wonderful chap. We've been pals for 35 years and I look up to him very much."

AC/DC's last album was 2008's "Black Ice", one of the group's most successful later albums, which was followed by a nearly two-year world tour.