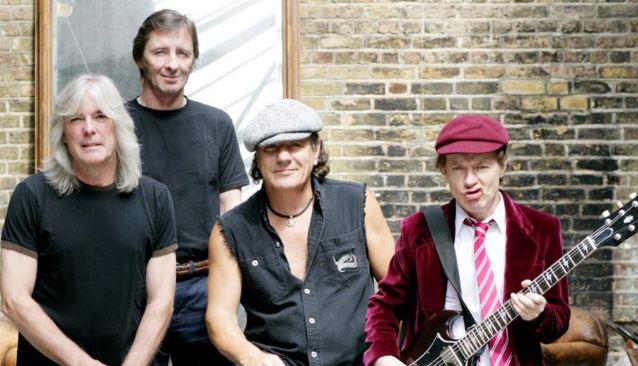 Legendary Anglo-Australian hard rockers AC/DC will release their first new album in six years, an 11-track collection named "Rock Or Bust", in Australia on November 28 and in North America on December 2.

Starting September 27, Turner Sports will provide fans a sneak peek of the new song "Play Ball" as part of the 2014 Major League Baseball Postseason campaign. The content will run for several weeks across TBS, the exclusive home to this year's American League Postseason coverage, as well as leading media brands within the Turner portfolio.

AC/DC has also revealed that founding guitarist Malcolm Young will not be returning to the group due to ill health. "Unfortunately due to the nature of Malcolm's illness, he will not be rejoining the band," reads a statement issued by the AC/DC's a label Alberts and Sony Music Australia.

AC/DC has confirmed it will embark on a world tour in to promote "Rock Or Bust" and celebrate the band's 40th anniversary, with Angus and Malcolm Young's nephew Stevie stepping in for Malcolm on rhythm guitar. Stevie played on the new CD, which was recorded at the Warehouse Studio in Vancouver, British Columbia, Canada with producer Brendan O’Brien and mixer Mike Fraser.

According to Rudd, tour plans had not yet been finalized, but he expected to return to the road shortly. "I'll get a call a month before they need me," he said.

"We've done some long, hard tours. It's not easy. You do it for 18 months, you're the walking dead when you finish, especially as you get older. But everything's great in the band, we're ready to fire up on all cylinders again."

Although some music news sites erroneously quoted Rudd as saying that the album was recorded in 10 days, he actually said that he was done with his drum parts in that time, adding, "I've never played better."

AC/DC biographer Jesse Fink stated earlier this year that it was likely Malcolm's absence would become permanent. He said: "The important thing is we all let Mal be and hope he can recover. We should all expect that Stevie is in the band now." Regarding the new material, he said: "I'm hearing on very reliable authority it's up there with 'Black Ice', or even better — so Stevie must be a good replacement for Mal."

"We miss Malcolm, obviously," AC/DC singer Brian Johnson told TeamRock Radio this past July. "He's a fighter. He's in hospital, but he's a fighter. We've got our fingers crossed that he'll get strong again.

"Stevie, Malcolm's nephew, was magnificent, but when you're recording with this thing hanging over you and your work mate isn't well, it's difficult. But I'm sure he was rooting for us. He's such a strong man. He's a small guy, but he's very strong. He's proud and he's very private, so we can't say too much."

The first AC/DC album in the band's 41 year history without Malcolm Young on the recordings, "Rock Or Bust" follows the immensely successful "Black Ice", which debuted at No. 1 in 31 countries upon release in 2008, and has gone on to sell nearly 8 million copies worldwide.