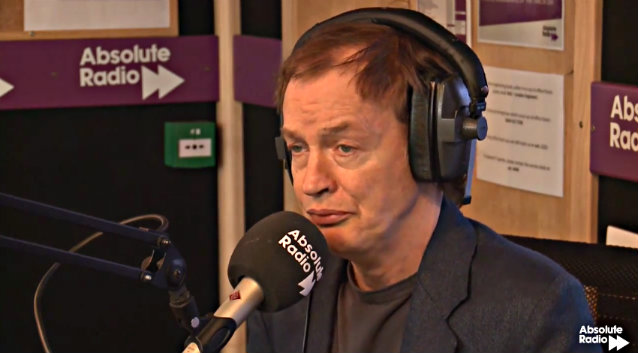 AC/DC guitarist Angus Young and singer Brian Johnson were recently interviewed by Christian O'Connell of UK's Absolute Radio. You can now watch the chat below.

SiriusXM's "AC/DC Radio" will air through Sunday, December 7 via satellite on channel 25 and through the SiriusXM Internet Radio App on smartphones and other connected devices, as well as online at www.siriusxm.com. The limited-run channel features music spanning AC/DC's entire career up to their new album, "Rock Or Bust", which is scheduled to be released on Tuesday, December 2, as well as classic rock music that airs regularly on SiriusXM's Classic Rewind channel.

AC/DC drummer Phil Rudd was missing from the band's new publicity photo and was also a no-show at the group's video shoot for "Play Ball" and "Rock Or Bust". Rudd was replaced for the filming by drummer Bob Richards (who had previously played with SHOGUN and IRON MAIDEN guitarist Adrian Smith),with singer Brian Johnson reportedly telling fans at the shoot that Rudd was unable to participate due to an undisclosed "family emergency."

On November 6, Rudd was charged with attempting to "procure murder" by New Zealand police but the charge was dropped a day later by the Crown Solicitor Greg Hollister-Jones after a meeting with Rudd's attorney, Paul Mabey, and police. Mabey said that Hollister-Jones reviewed the case and concluded that "there was insufficient evidence to justify that charge. He has now withdrawn the charge."

Rudd still faces one charge of threatening to kill as well as possession of meth and marijuana, which his lawyer described as "minor."